Find traditional instrumental music
This is the stable version, checked on 12 May 2022.
Jump to: navigation, search 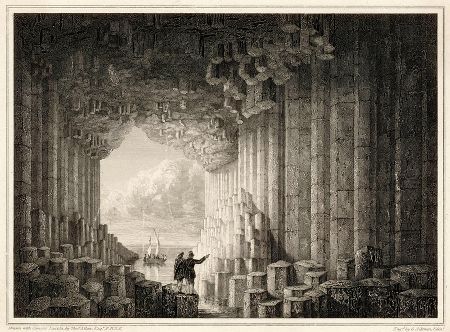 Fingal's Cave, Staffa, Date 19th century.
FINGAL'S CAVE [2] (Gul Fhin). AKA and see "Cuilfhionn," "Fingal's Weeping." Scottish, Canadian; Air or March (2/4 time, slow). Canada, Cape Breton. A Dorian. Standard tuning (fiddle). AAB (Kerr, Lerwick, Martin): AB'B' (Morison). A popular Highland pipe tune that has been set variously as a hornpipe, march, quickstep,and slow air, though perhaps most popular in its march setting. Fingal, or Fionn Mac Cumhaill [1], is a mythic Scottish and Irish hero, who, like King Arthur, is said not to be dead at all, rather, he sleeps in a cave, surrounded by his followers the Fianna. One day he will awake and defend Ireland in the hour of her greatest need. In 1762 writer James MacPherson published his 'translated' six volume poem of Fingal by his son Ossian, although he failed to substantiate his claim that he used original texts. Despite criticism, his work was hugely popular and helped to usher in the romantic era in Europe.

Fingal's Cave is the romantic name for a sea cave on the uninhabited island of Staffa, in the Inner Hebrides of Scotland.

Because they were so brave and young
Who now are sleeping,
His old heart wrung, his harp unstrung,
Fingal's a-weeping.