Back to Fisher's Minuet 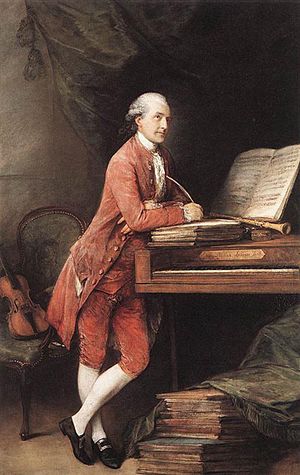 The melody was not only popular in America, but was celebrated in Britain and Ireland as well. It was the composition of Johann (sometimes John) Christian Fischer [1] (1733-1800), a German oboist and composer living in London, and, from 1780, a member of (the largely German) chamber ensemble to George III's spouse, Charlotte of Mecklenburg-Strelitz. According to singer and actor Micheal Kelly (c. 1762-1826) it was 'all the rage' in Dublin about 1770 [see Kelly's Reminiscences, p. 4]. Mozart composed "Twelve Variations in C on a Menuett of Johann Christian Fischer" for keyboard (K 179). Composer, singer and actor Charles Edward Horn (1786-1849) records in Memoir of Himself [ed. by Michael Kassler, 2003, Ashgate Publishing Limited]:

However, one summer afternoon I was rehearsing my variations when my father's return to London unexpectedly brought him to the door accompanied by Fisher, the celebrated oboe player who was in the King's band, and the very same person who composed the Minuetto called 'Fisher's minuet' and danced by the royal family [and] all the celebrated dancers of that day. This event determined my becoming a musician....

Johann Christian Fischer may also be the composer of the widespread "Fisher's Hornpipe," which appears about the same as did the minuet, although it has also been attributed to J. Fishar, a British musical director and ballet master.

Recorded sources : - The earliest sound recording of the tune is on the 3rd Barrel, 10th tune, of a mechanical Chamber Barrel Organ [2], hand-built by John Langshaw (1718-1798), Organ Maker, Lancaster, c. 1785. The organ is one of three surviving Langshaw organs.

Back to Fisher's Minuet