Find traditional instrumental music
This is the stable version, checked on 21 July 2020.
Jump to: navigation, search

FLOGGIN', THE ("An Seisd Buailteac" or "Ríl na Lasctha"). AKA - "The Flogging Reel." AKA and see "Flaggon (The)" (Scottish), "Flagon (The)," "Flogging Reel (The)" (Ire.), "Humors of Bantry Bay (1)," "Newry Lass (The)," "Slashing Reel." Irish, Reel. G Major ('A' and 'B' parts) & G Mixolydian ('C' part). Standard tuning (fiddle). ABC (Breathnach, Mallinson, Mitchell): AABC (Howe, O'Neill/1915 & 1001, Taylor): AABCC (Allan's, Gow): AABBC (O'Neill/1850): AABB'CC (O'Neill/Krassen). As "The Flogging Reel" the tune is a popular reel in County Donegal. Breathnach (1976) says it is related to "Fife Reel (The);" see also the first part of "Pirrie Wirrie." O'Neill (1913) mentions this tune in an anecdote about uilleann piper Patrick Ward, a 19th century farmer-piper of Blackbull, Drogheda. Ward was an accomplished fiddler before he picked up the pipes, but learned, as most did, by ear. His first lesson in writing music was not without difficulty; "having neither pen nor ink, he was told by his teacher, 'a dark man', to burn a furze stick and write with its calcined end. This expedient served fairly well. From that day to this he says that whenever he takes a pen in his hand to write music his mind reverts to "the Flogging Reel," which was the first tune set down in the manner mentioned." The reel was remembered by Kilmaley, County Clare, fiddler, flute player and uilleann piper Peader O'Loughlin as one of the tunes he listened to his father, a flute player, play in the 1930's (Blooming Meadows, 1998). The title appears in a list of tunes in his repertoire brought by Philip Goodman, the last professional and traditional piper in Farney, Louth, to the Feis Ceoil in Belfast in 1898 (Breathnach, 1997), and a standard notation transcription was included in the c. 1890's music manuscript collection of "Professor" Patrick D. Reidy, a dancing master resident in London who taught at Gaelic League functions. The tunes in Reidy's MS were collected from musicians who accompanied dancers at the time. The melody was also cited as having commonly been played for country dances in Orange County, New York, in the 1930's (under the title "Flogging Reel") {Lettie Osborn, New York Folklore Quarterly}. 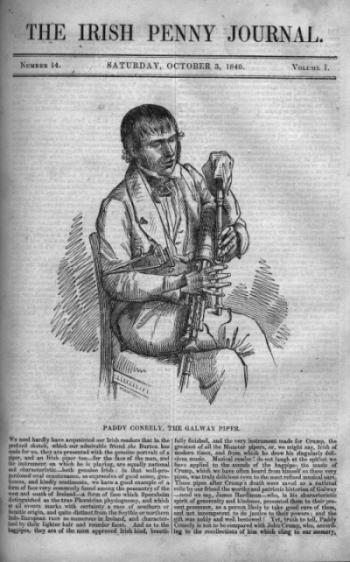