Find traditional instrumental music
This is the stable version, checked on 11 June 2020.
Jump to: navigation, search

Back to Flying Clouds (1) 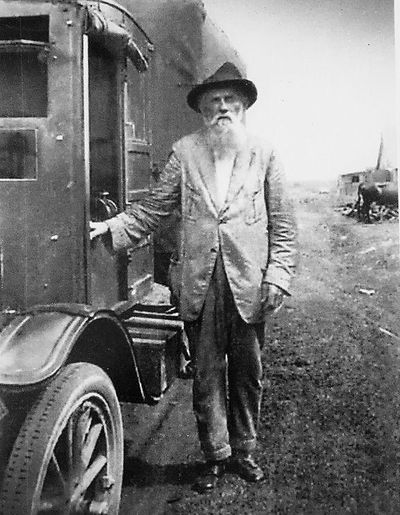 Uncle Jimmy Thompson, standing by the T Model Ford truck given to him by Henry Ford. As the story goes, Ford heard Thompson play in Texas and invited him to come to Detroit to play for the President of the United States. Thompson accepted, and after the performance Ford took him to the factory and told him to pick any automobile in the plant. He picked the truck in the photo, added a camper to it, and traveled around Southern regions playing at fairs and various other venues. The story sound apocryphal, but has elements of truth. It is known that Thompson bought a Ford truck himself around 1916, and that he and his wife "Aunt Ella" travelled around in it to fairs for several years. Thompson played in Ford's nationwide fiddle contest in 1926 and won the Tennessee state championship, however, the following day at the regional championship in Louisville, Kentucky, Thompson failed to place in the top three and did not advance.
FLYING CLOUDS [1]. American, Reel. USA; Texas. G Major. Standard tuning (fiddle). AABB'. The tune was in the repertory of Uncle Jimmy Thompson (1848-1931), learned when he was aged seventeen, probably in Texas, around or prior to 1865, perhaps from returning Civil War veterans. Unfortunately, the elderly Thompson only recorded four sides; two in 1926 and two in 1930, ably backed by his niece, Eva Thompson Jones, who worked as piano accompanist for WSM in Nashville. "Flying Clouds" was the first piece in the 1930 Vocalion recording "Uncle Jimmy's Favorite Fiddling Pieces" (followed by "Leather Breeches"), introduced by him on the recording:

I'm a-gonna play you one of our old-timey pieces, as I learned and knew before the Civil War....It's "Flyin' Clouds"...Oh, it's a good one. It just gets down in people's heels and they can't keep from dancin'. They have to dance on it.

Back to Flying Clouds (1)