Back to For Ireland I Won't Say Her Name (1)[edit]

FOR IRELAND I WON'T SAY HER NAME [1] ("Ar Éirinn ní Neosfainn Cé Hí" or "Air Éire ní Neó'sainn Cia h-Í). AKA - "For Ireland I'd Not Tell/Say Her Name." AKA and see "Ar Éirinn ní Neosfainn Cé Hí." "I Am a Disconsolate Rake," "Nancy the Pride of the West," "River Lee (The)," "Storeen Machree," "Tweedside." Irish, Slow Air (6/8 or 3/4 time). D Major (Boys of the Lough, Miller & Perron): G Major (Mac Amhlaoibh & Durham, Ó Canainn, O'Neill). Standard tuning (fiddle). One part (Boys/Lough, Mac Amhlaoibh & Durham, Ó Canainn): AB (Miller & Perron, O'Neill). The song attached to this slow air, according the Boys of the Lough, relates the tale of a beautiful maiden who appeared for a short time to a Gaelic poet, resisted his advances and then disappeared forever, leaving him heartbroken. Another version has it that the protagonist falls secretly in love with a maid, although he is too poor to support her and too shy to propose. He goes abroad to seek his fortune, and once made and emboldened he returns home to claim his beloved, only to discover she has married his brother. Brokenheared, he composes this song, though for obvious reasons he refuses to reveal the name of his beloved. The Boys of the Lough note some similarity between this tune and the English/Scottish border tune known as 'Tweedside.' "...It is often called 'Binn lisin aerach a Bhrogha' (The melodious little lis of Bruff, Co. Limerick) from a song about that place" (Joyce). The melody was published by both Petrie and Joyce (p. 221, appears as "Nancy the Pride of the West") as the vehicle for songs, and the music appears in Poets and Poetry of Munster (1849). Joyce also later included it in his Irish Music and Song." Words to the song begin: 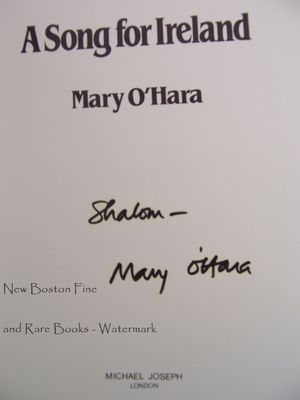 Last night as I strolled abroad
On the far side of my farm
I was approached by a comely maiden
Who left me distraught and weak.
I was captivated by her demeanour and shapeliness
By her sensitive and delicate mouth,
I hastened to approach her
But for Ireland I'd not tell her name. ......... (Mary O'Hara, A Song for Ireland).

Back to For Ireland I Won't Say Her Name (1)[edit]