FORT AUGUSTUS. English, Country Dance (2/4 time). G Major. Standard tuning (fiddle). AABB. Fort Augustus [1] is a village on the shores of Loch Ness, in the Scottish Highlands. Its original Gaelic name was displaced after the Jacobite rising of 1715, when the place was fortified by the English and named after the Duke of Cumberland. The village and fort fell to Bonnie Prince Charlie's forces in March, 1746, just before the Battle of Culloden, after which the English quickly retook it. Davis's country dance collection was published some few years after the second Jacobite rebellion, and thus the "Fort Augustus" country dance was a topical title. 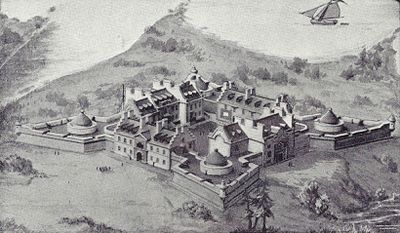 Fort Augustus as it looked in 1746