Find traditional instrumental music
This is the stable version, checked on 21 June 2020.
Jump to: navigation, search 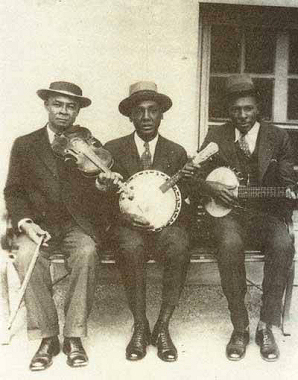 Lynn Abbott and Doug Seroff, in their book Out of sight: the rise of African American popular music, 1889-1895, discuss the origins of "Forty Drops" and conclude this "very early folk rag" came from African-American string band tradition prior to the mid-1890's. It was mentioned in the newspaper the Levenworth Herald in 1894, when editor B.K. Bruce Jr. "identified it with the irrepressible hammerings of eastern Kansas' black society girl pianists" (p. 449). It was not published, however, until 1898, in an arrangement for guitar and mandolin (no composer is credited, only the arrangers). Both the Baxters and the Striplings may both have played simplified versions of the original rag.

The Baxters associated 'forty drops' with alcohol, as their spoken introduction reveals:

"Now this is the 'Forty Drops'.
"Forty drops of what?"
"Forty drops of rye!"
"Who's gonna carry me home when the dance is over? 'Cause I'm gettin' about full of this rye!"

However, Abbott and Seroff note that 'forty drops' more likely referred to the drug laudanum or morphine, "popular recreational drugs of the 1890's, typically dispensed in drops."