Find traditional instrumental music
This is the stable version, checked on 11 November 2020.
Jump to: navigation, search

Back to Fred Wilson's Clog (1)

FRED WILSON. The distinction of being the oldest living minstrel undoubtedly belongs to the subject of this sketch, who made his first appearance about 1843, and for four or five years allied himself with many of the various minstrel companies that sprang up after the success of the parent organization. In 1848 he joined 'Bije' Thayer's Minstrels, a prominent Boston Company. While Mr. Wilson was not the first to do clog dancing in this country, he was undoubtedly the first to do so in a minstrel company. In the Fall of 1858 he joined Bryant's Minstrels in New York, and about December 1, that year, made his first appearance in Boston with the Morris Bros., Pell and Trowbridge's Minstrels, where he made a lengthy stay. April 29, 1861, he opened with Lloyd's Minstrels in New York, closing May 25, following. Later he went to China in a government capacity, but not liking the cooking in the Celestial Empire, returned to the United States, arriving January 25, 1864. (Charley) Morris and Wilson's Minstrels opened their permanent Home in St. Louis, April 10, 1865; the partnership dissolved in February, 1867. Fred Wilson's Minstrels toured for two or three years, and then Mr. Wilson made another foreign trip; but returned in the Summer of 1871. In 1872 he was with Cal. Wagner's Minstrels, and in 1875 made another foreign invasion, remaining abroad five years, returning in 1880 and joining Haverly's Minstrels. Subsequently Mr. Wilson, whose specialty for many years had been clog dancing, except in 1852 when he was a clown in a circus, took up executive duties with many minstrel and other organizations. He also promoted several attractions of his own. Fred Wilson was born in Boston, Mass., November 9, 1827. 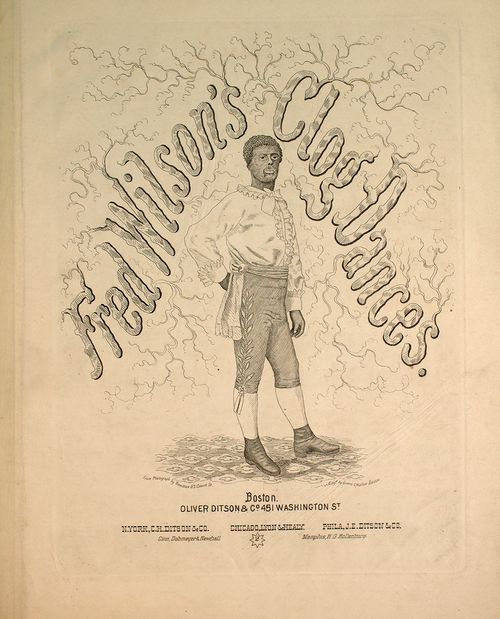 Frank Dumont in an article in the New York Clipper[1] credits Wilson with introducing the clog dance on the minstrel stage several years before the Civil War, when he was with Morris Brothers' Minstrels. "Fred Wilson's" was one of many tunes learned from Ryan/Cole's by Cape Breton fiddlers and, according to Richard Nevins (Shanachie 14001), was popular around Margaree, Cape Breton (fiddler Angus Chisholm was born in Margaree Forks).