GAFFER GRAY. English, Scottish; Air (6/8 time). D Minor. Standard tuning (fiddle). One part. "Gaffer Gray" is the name of a poem by Thomas Holcroft that was contained in his novel Hugh Trevor, the first part of which appeared in 1794, and the remainder in 1797. It ironically berates the well-to-do for their lack of charity while at the same time depicting the misfortunes of old age and poverty. The first two stanza's go: 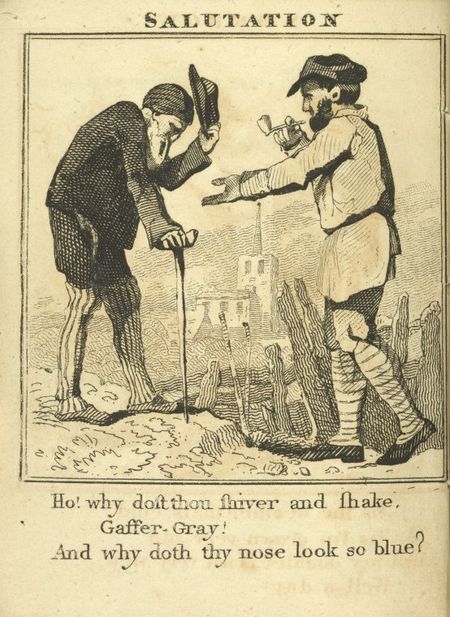 “HO! why dost thou shiver and shake,”
Gaffer Gray,
And why doth thy nose look so blue?”
——“'Tis the weather that's cold,
——'Tis I'm grown very old,
And my doublet is not very new,
Well-a-day!”

“Then line that warm doublet with ale,
Gaffer Gray,
And warm thy old heart with a glass.”
——“Nay, but credit I've none,
——And my money's all gone;
Then say how may that come to pass?
Well-a-day!”


Holcroft's poem was a favorite with the public, and was reprinted through the 19th century, even for children; Gaffer Gray: or, The misfortunes of poverty, a Christmas ditty, very fit to be chanted at Whitsuntide is a picture book from the early 19th century.