GANNACHIE BRIDGE. Scottish, Jig (6/8 time). A Major. Standard tuning (fiddle). AABB'. Gannachie Bridge was a single-arch bridge spanning the River Esk at Fettercairn, built in 1732, whose pillars were anchored on each side by great rocks. 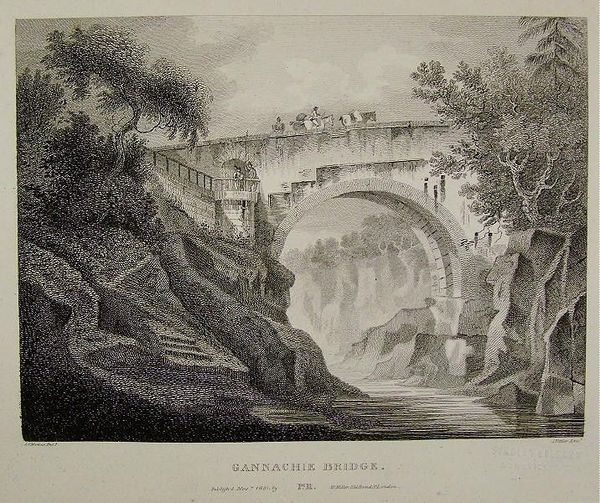 Beneath the bridge is a vast abyss, near fifty feet in depth, through which the river sometimes rushes with overwhelming violence. Its rocky channel, with its lofty and precipitous sides, fringed with wood, forms a series of picturesque and beautiful scenery both above and below the bridge.

It would be wrong to omit an opportunity of making the name of the perfon known, at whose ex- pense this bridge was erected: though Pennant asserts it was built by subscription. James Black, a farmer in the parish of Edzel, agreed with a mason to lay down all the materials for three hundred merks, Scotch. Black was an industrious and ingenious man, and built the parapet with his own hands. Al- though three hundred merks is now but a small sum, yet it was a considerable one for a tenant to afford seventy years ago. And such deeds deserve to be recorded. The bridge was built in 1732. At his death Mr. Black left two hundred merks to the poor of the parish of Fettercairn, and fifty merks for the repair of the bridge. Such is the account of the Rev. Robert Foote. This view was taken in 1799.