Find traditional instrumental music
This is the stable version, checked on 28 February 2020.
Jump to: navigation, search

Back to Garfield's March

GARFIELD'S MARCH. AKA - "Garfield's Funeral March." Old-Time. The piece was derived from a piece of sheet music called "Garfield's Funeral March," dating from the 1881 assassination of President James A. Garfield [1] (Wolfe, 1997), however, there were a number of pieces with the same name (by Edwin Christie, E. Gilmore and others), mostly minor-key dirges. The tune was recorded in Ashland, Kentucky, by Kanawha County, West Virginia, fiddler Clark Kessinger (1896-1975) and his nephew Luches ("The Kessinger Brothers" as the record label denoted them) for Brunswick Records in February, 1928, learned from local W.Va. fiddler Abe Glenn in 1903 when Kessinger was aged seven [1]. 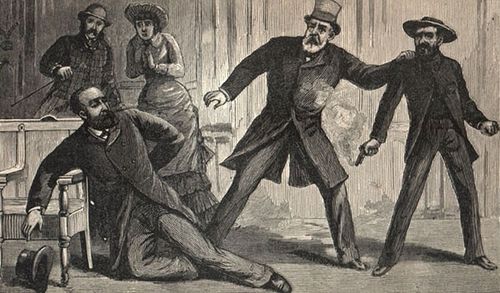 The assassination of James Garfield

Back to Garfield's March