Back to General Greene's March (1)[edit]

GENERAL GREENE'S MARCH [1]. AKA - "General Green's March." American, March (whole time). G Major. Standard tuning (fiddle). AABB. The march was entered into the c. 1776-1778 music copybook of fifer Thomas Nixon Jr. [1] (1762-1842), of Framingham, Connecticut. Nixon was a thirteen-year-old who accompanied his father to the battles of Lexington and Concord, and who served in the Continental army in engagements in and around New York until 1780, after which he returned home to build a house in Framingham. The copybook appears to have started by another musician, Joseph Long, and to have come into Nixon’s possession. 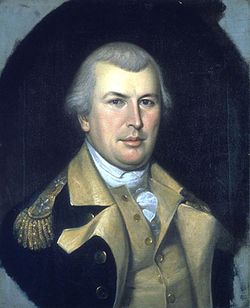 There are marches with the names of a few American generals of the Revolutionary period contained in the manuscript, including Washington and Knox, as well as Greene (spelled 'Green' in Nixon's ms.). Rhode Island-born Nathanael Greene [2] (1742-1786) rose from the rank of private to become a Major General in the American War of Independence, and is best known for his defense of the the southern colonies.

"General Green's March" appears in fife tutors and martial collections commencing at the beginning of the 19th century. It is contained in Samuel Holyoke's Instrumental Assistant (1800, Exeter, NH), Norris & Sawyer's The Village Fifer (Exeter, NH, 1805), Charles Robbins' Drum and Fife Instructor (1812, Exeter, NH), and Henry Moore's Merrimack Collection of Instrumental and martial Musick, vol. 1 (Concord, NH, 1833). "General Green's March" was also entered into the copybooks of John Williams (1799, Salem, Ma.) and John Stiles (1807). The march in Robbins' Drum and Fife Instructor is printed with the alternate title "15th Regiment," a reference to the American 15th Regiment raised in Rhode Island and originally known as Church's Regiment after its commander, Colonel Thomas Church. The regiment served in the Siege of Boston until its term of service expired on December 31st, 1775, when it was disbanded. Nathnael Greene was the brigade commander in charge of the Rhode Island troops.

Back to General Greene's March (1)[edit]