Find traditional instrumental music
This is the stable version, checked on 31 December 2019.
Jump to: navigation, search

Back to General Knox's March

GENERAL KNOX'S MARCH. AKA and see "Colonel McLean's March," "New Duke of York's March," "Slow March (1)." American (?), March (whole time). D Major (Nixon): C Major (Ditson). Standard tuning (fiddle). AABB. The march was entered into the c. 1776-1778 music copybook of fifer Thomas Nixon Jr. [1] (1762-1842), of Framingham, Connecticut. Nixon was a thirteen-year-old who accompanied his father to the battles of Lexington and Concord, and who served in the Continental army in engagements in and around New York until 1780, when he returned to Connecticut. 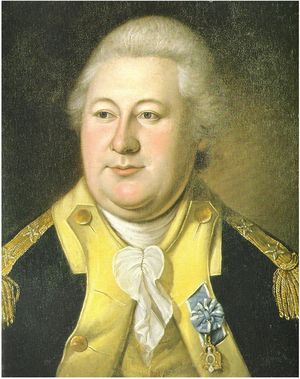 The title honors General Henry Knox [2] (1750-1805), Washington's chief artillery officer throughout the War of American Independance, who dragged cannon on sledges from Fort Ticonderoga to Boston in 1775 to lay siege to the British. Later Knox served as the first Secretary of War in the new government.

The provenance of the tune is unknown, however. The earliest printing was in John Watlen's Celebrated Circus Tunes (1791) as "New Duke of York's March, the composition attributed to 'Shroeter'. A version appears as "Colonel McLean's March" in Glasgow musician James Aird's Selection of Scotch, English, Irish and Foreign Airs, vol. 6 (1803), and another in the 1860's music manuscript collection of Lancashire fiddler William Tildesley as "Slow March (1)."

Back to General Knox's March