Back to Georgia Horseshoe 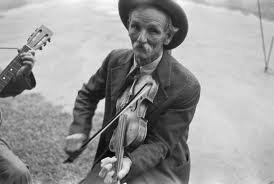 Fiddlin' Bill Hensley, 1937. Photograph by Ben Shahn, 1898-1969.
Hensley also attributed the tune to Junalaska, whom he described as an "Indian chieftain during the Civil War. Bill saw the Indian when he was a small boy, and told me that his white hair hung almost to the ground"[1]. Hensley also recalled that "Snowbird on the Ashbank (4)" was also a tune that Junalaska played.

Hensley's tail is perhaps apocryphal, for Junalaska died several years before Bill was born. Junaluska (c. 1775-1868), or sometimes Junalaska or Junalasky, was a leader of the Cherokee who resided in western North Carolina in the early 19th century. He was removed, along with most of the tribe, on the Trail of Tears, but returned in the 1840's to North Carolina. He fought in the battle of Horseshoe Bend in 1813, and reputedly saved Andrew Jackson's life, though he later regretted doing so.

Back to Georgia Horseshoe