Back to German Dance (2)

GERMAN DANCE [2]. Scottish, Country Dance Tune (2/4 time). G Major. Standard tuning (fiddle). AABBC. The melody was first published in John Watlen's Celebrated Circus Tunes (Edinburgh, 1791), reprinted some five years later by Glasgow publisher James Aird, as were several of the tunes in Watlen's collection, without source credit. Watlen notes the tune was performed by "Mr. Sutton," referring to Giles Sutton (AKA "The Little Devil"), a late 18th/early 19th century equestrian, acrobat and dancer who often performed at the Royal Circus and similar venues. Sutton began his career with Hughes' Royal Circus in St. George's Fields around 1785. He was advertised in 1793 with Astley's Royal Circus as "Mr. Giles Sutton, the original Little Devil," who would "ride with his head upon the saddle, full speed, likewise will leap over a garter placed in four different parts of the riding school." Tragedy struck in December, 1797, when his mother, actress and singer Miss Froment (1756-1797, who had married an obscure performer named Sutton at the age of 16) drowned along with members of Astley's troupe while crossing St. George's Channel. Giles Sutton also danced in the chorus of British Amazons, and danced Health in Fire and Sprit, pantomimes given at Sadler's Wells in 1803. He was back with the Royal Circus in 1806, acting in pantomimes and performing on horseback, where he continued for some years. [Highfill, Burnim, Langhans, A Biographical Dictionary of Actors, Actresses, Musicians, Dancers, Managers & and Other Stage Personnel in London: 1660-1800, 1991] 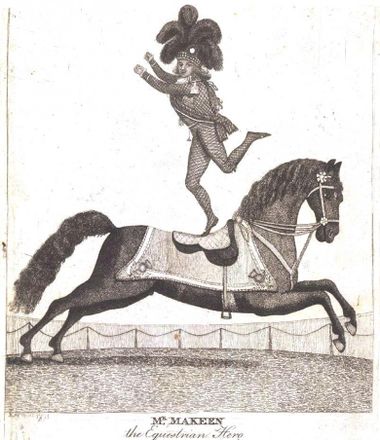 Back to German Dance (2)