Find traditional instrumental music
This is the stable version, checked on 27 February 2021.
Jump to: navigation, search

Back to Getting George Bush Upstairs 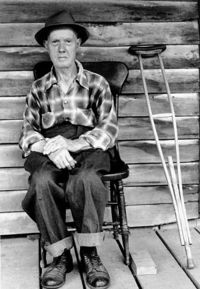 Perry Riley
GETTING GEORGE BUSH UPSTAIRS. American, Reel (cut time). A Major. AEae tuning (fiddle). AA'BB'. The tune and title (of which there are several variations) long predate the American Presidents of that name. The source for most modern versions is Kentucky fiddler Perry Riley (1893-1986) who was an elder cousin to another famous Kentucky fiddler, Buddy Thomas. Although lame from childhood, Riley was an itinerant laborer who wandered the South in search of work, living at different times in West Virginia and Arkansas[1] As Thomas related to Mark Wilson:

There weren’t hardly any other fiddlers around when I was growing up, only Perry Riley and he’d just come through every once in a while. He’s my second cousin on my mother’s side. He worked in West Virginia and Arkansas a lot and he’d go away and nobody would even know whether he was dead or alive. Once when I was a boy, it was fifteen years before we ever saw him again[2].

Back to Getting George Bush Upstairs