GIRL WITH THE BLUE DRESS ON [3], THE. AKA and see "Old Wiley." Old-Time. USA, West Virginia. A Dorian. AEae or standard tuning (fiddle). AB. A West Virginia tune, according to Doc White (1889-1974) of Ivydale, W.Va., often played by regionally influential blind eastern Kentucky fiddler Blind Ed Haley (1885-1951) of Ashland, Kentucky (born in West Virginia). White was an autodidact, training himself in dentistry, medicine, midwifery and a variety of other trades. He often made house calls to those too ill to come to his office, and was said to have delivered more than 1,800 babies in Clay County. In addition, White served as a local Justice of the Peace for more than thirty years. Fiddler Charlie Acuff played a cousin to this tune, also in the key of G Major, according to John Hartford. See the related "Give the Fiddler a Dram (2)." 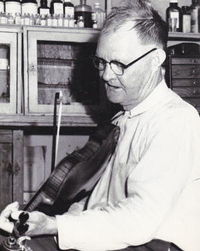