Back to Glorious 12th of April[edit]

GLORIOUS 12TH OF APRIL. AKA - "Rodney for Ever." English, Country Dance Tune (2/4 time). B Flat Major. Standard tuning (fiddle). AABB. The tune appears to be unique to Samuel, Ann and Peter Thompson's Compleat Collection, vol. 5 (London, 1788). The alternate title given by the Thompsons, "Rodney for Ever", confirms that the tune celebrates Admiral Sir George Rodney's victory at the Battle of the Saintes [1], April 12, 1782. The engagement was fought in the West Indies, off Guadeloupe, and involved the same French fleet that blockaded the British at Yorktown during the American Revolution. The victory prevented a planned invasion of Jamaica. 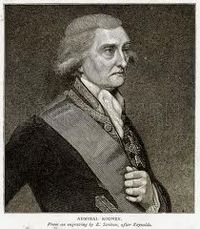 Battle of the Saintes

On his return to Britain, Rodney was made a peer and was awarded an annual pension of £2,000. He lived in retirement until his death in 1792.

The use of Rodney as a first name originates with the admiral. It became a popular name for boys at the end of the eighteenth century [wikipedia]. See also the Thompson's second tune commemorating the victory, "Admiral Rodney's Triumph."

Back to Glorious 12th of April[edit]