Find traditional instrumental music
This is the stable version, checked on 13 January 2021.
Jump to: navigation, search

Back to Green Back Dollar

GREEN BACK DOLLAR. AKA - "Green Backed Dollar Bill," "Old Greenback Dollar." American, Reel and Song. USA; Tennessee, Arkansas, Oklahoma. A Major (Thede): C Major (Hartford, New Lost City Ramblers). AEae or Standard tunings (fiddle). AAB. The American 'greenback', the one dollar bill printed by the federal government, did not make its appearance until 1861, when the first national paper money was issued. Prior to that year paper money was exclusively in script, printed by local banks and guaranteed by them for the note's value in metal. Unfortunately, this promise of exchange was only as good as the extent one knew and trusted the solvency of any particular bank, and the farther script travelled from its source, the more its actual trade value varied. The title appears in a list of traditional Ozarks Mountains fiddle tunes compiled by musicologist/folklorist Vance Randolph, published in 1954. 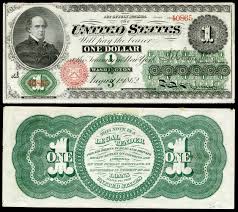 John Hartford (2001) says that fiddler Howdy Forrester played two versions of "Greenback Dollar," the standard form and "one (form) he said the way his people played it was 'lengthened out'". Forrester's family was from Hickman County, Tennessee. Hartford says "Greenback Dollar" is "essentially an old tune called 'Possum Up a Gum Stump (1)'." Early Grand Ole' Opry star Dr. Humphrey Bate recorded "Greenback Dollar" in his only Atlanta session, backed by a band that included middle-Tennessee fiddler Oscar Stone. This version has similarities to "Billy in the Lowground (1)." The Perry County, Tennessee, based Weems String Band's "Greenback Dollar (2)", recorded in Dec., 1927, is a different tune than the one printed by Thede.


Back to Green Back Dollar