Back to Green Mountain (2)

GREEN MOUNTAIN [2], THE (An sliab glas). AKA and see "Barmaid (The)," "Haymaker Reel (1) (The)," "Maid behind the Bar (1) (The)," "Indy's Favorite," "Judy's Reel," "Little Judy," "Long Island Reel." Irish, Reel. D Major. Standard tuning (fiddle). AB (Moylan, O'Neill/1850): AABB (O'Neill/Krassen). The reel is a variant of "Maid Behind the Bar (1) (The)" family of tunes. It was first recorded under the "Green Mountain" title early in the 78 RPM era by The Flanagan Brothers, Joe, Mike and Louis, originally from Waterford City, Ireland, in the 1890's. They emigrated to the United States with their parents at the turn of the century and settled in Albany, New York. Folklorist Mick Moloney writes of them in liner notes to the Topic Records album "An Irish Delight: Classic Recordings of Irish Traditional Music in America": 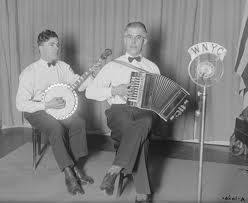 The Flanagans had a keen eye and ear for the musical tastes of the public and this heavily influenced the repertoire they chose to perform. They had arrived in New York at the end of an era which had seen the demise of the vaudeville and music hall circuit, but they found that audiences still expected the slickness in presentation which were so characteristic of both these domains. As Irish entertainers, they faced the additional audience expectation that they perform Stage Irish material. So they dressed up in green, white and gold costumes and did just that. They wrote lots of Stage Irish skits in the "Mike and Pat" mold (several of which they recorded) and sang sentimental Irish American songs, like Too Ra Loo Ra Loo Ra and I'll Take You Home Again, Kathleen, and humourous burlesque songs, such as Cod Liver Oil and The Widow McCarthy, They also played and recorded driving, rhythmic selections of jigs, reels, hornpipes and barn dances on accordeon and banjo. It is perhaps for these instrumental selections that they are best remembered today, but in fact all their recorded material provides a fascinating insight into the musical and theatrical skills of this remarkable trio.

"Green Mountain" was also recorded on 78 RPM in Dublin in 1937 by Donegal fiddler Neil "Neilie" Boyle (1889-1961), locally known as 'Neillidh Phádaí Neillidh'. According to Varlet & Spottswood (1992), Boyle was born in Easton, Pennsylvania, to Irish parents but soon after the family moved back to Donegal, where he became an influential exponent of the northern Irish style of playing. See also note for "Long Island Reel."

Back to Green Mountain (2)