Green Woods of Truigha (The)

GREEN WOODS OF TRUIGHA/TRUAGH (Coillte Glas na Triuca). AKA and see "Colonel O'Gara," "Silence is in Our Festive Halls." Irish, Slow Air (3/4 time). G Major (Muholland, O'Neill: E Flat Major (Haverty). Standard tuning (fiddle). AB. O'Neill (Irish Folk Music, p. 131) points out that the tune is well-known throughout Ireland. Belfast collector Edward Bunting (1773-1843) wrote: “it is a melody of great antiquity, as is proved both by its structure, and by the fact of its being known by so many different names in different parts of the country. Thus, it is known in Ulster as “The Green Woods of Truigha” in Leinster as “Edmund of the Hill,” in Connaght as “Colonel O’Gara” and in Munster as “More No Beg,” with a variety of other aliases.” (p. 16). O'Neill identifies "Green Woods of Truigha" also as an Ulster title. As "Green woods of trucha" the air appears in John Mulholland's Ancient Irish Airs, a volume dedicated to Charles Earl O'Neill, "Knight of the Order of St. Patrick," who is identifed as a lover of Ireland and its music. 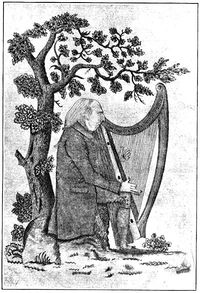 The air (along with "Mrs. Crofton," sometimes "Madam Crofton") was played by blind harper Arthur O'Neill (1734-1818) at the first Granard Harp Competition in 1781, a performance which earned him the second prize of eight guineas. The next year at the second Granard gathering O'Neill again won second prize playing the tune once again, this time paired with "Fairy Queen (1)." The prize, however, had been reduced to six guineas. Thomas Moore set a song to the melody entitled "Silence is in Our Festive Halls."