Back to Greensleeves (1)[edit]

GREENSLEEVES [1]. AKA and see "Bacca Pipes." English, Jig (6/8 time) and Morris Dance Tune (6/8 time). G Mixolydian (Bacon-Longborough): A Minor (Bacon-Stanton Harcourt). Standard tuning (fiddle). AB. The tune was used for a solo or duet dance in the morris tradition called the "Bacca Pipes" (i.e. long-stemmed tobacco pipes, which were placed crossed on the ground and danced around). The melody was collected in the Cotswold villages of Bledington (Gloucestershire), Headington (Oxfordshire), Ilmington (Warwickshire), Longborough (Gloucestershire), and Stanton Harcourt (Oxfordshire). "Greensleeves" is mentioned in a morris context by Alan Nowell in his article "Dance Traces Surviving in The Ritual of Freemasonry" (published in Archaeology Ireland, Spring 2010): 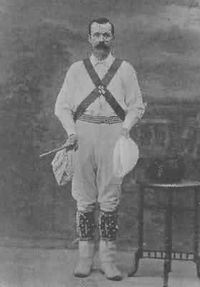 This mention of comedy is wholly relevant. If you look at a reconstruction of the dance on youtube.com (by searching "3 kick, wyresdale" [1]) you will hear a lot of laughter from the audience. This is initiated when the dancers start an arse-kicking sequence (in Wyresdale the hopping dance was simply known as "Greensleeves" and in a local fiddler's tune book from 1789 the tune Greensleeves is also titled "kick my A-E"). I have found this the hardest part of my investigation because comedy is so ephemeral and difficult to deal with in an ancient historical context. This repeated kicking chorus (found in a Wyresdale hopping dance, Northumberland) may have had a separate history. It occurs in the Ilmington Buffoon Cotswold Morris Dance and it seems to be related to Pimponpet which is listed as one of Gargantua's Games by Rabelais (c. 1494–1553). In Randle Cotgraves' English/French Dictionary published 1611 it is described as "A kind of game wherein three hit each other on the bumme with one of their feet". In 1653, Thomas Urquhart, translator of Rabelais, seems to have been familiar with Pimponpet and translates it as Bumdockdousse.

Back to Greensleeves (1)[edit]