Find traditional instrumental music
This is the stable version, checked on 31 December 2021.
Jump to: navigation, search

GROUNDHOG. American, Reel and Song (whole or cut time). USA; North Carolina, Virginia, West Virginia. A Major. Standard tuning (fiddle). One part. A well-known Appalachian folk song, nursery and fun song, with instrumental versions played on a variety of instruments. The Library of Congress recorded fourteen versions of the melody (sung and played) before 1940. Fiddler Marion Reece (1874-1939), of Zionville, western North Carolina, even recorded an instrumental version playing the fife, on the instrument his forbearers played[1]. Brown says, "Its appearance in the Ozarks is doubtless due to immigration from Kentucky. It has not been found in the northern states, nor is it a Negro song." The first two verses in Warner's Traditional American Folk Songs go: 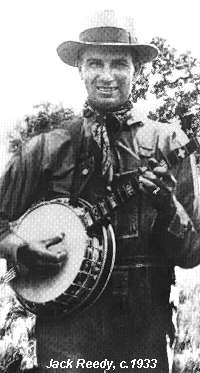 Reedy (whose given name was Weldon, not 'Jack'), later recorded in 1930 as Jack Reedy & His River Boys, with many of the same personnel, and also recorded with the Hill Billies and with the Smyth County Ramblers[2]. Reedy was from Smyth County, Virginia, and was associated with central Blue Ridge musicians, including H.M. Barnes' Blue Ridge Ramblers, and Frank and Ed Blevins, in addition to the Hill Billies[3]. His finger-picked banjo style predated the popular bluegrass style by fifteen years, and he kept playing longer than many early country musicians, trying to sustain himself as a professional musician. Like many, he needed a day job to make ends meet, and he worked off an on in furniture factories. Reedy toured vaudeville circuits in the 1930's, and did radio work in Bristol, Tenn., and Bluefield, W.Va., and died of a heart attack in the latter town[4].

Marshall Wyatt researched Reedy for booklet notes to the Old Hat Enterprises CD "Music from the Lost Provinces" (1997), and remarked:

Jack Reedy joined forces with Frank and Edd Blevins soon after the brothers moved to Smyth County in 1929, forming a band that would last many years, though regrettably the trio never made records together. In 1933 they won top honors at the White Top Folk Festival, and performed in a special program for visiting First Lady Eleanor Roosevelt, amidst a flood of publicity Paramount Newsreel footage, now lost, captured the Reedy-Blevins Band performing Johnson's Old Gray Mule and Cluck Old Hen as Mrs Roosevelt looked on. The group expanded in 1934 with the addition of guitarist Corwin Matthews, dubbing themselves the Southern Buccaneers. Led by Frank Blevins, the Southern Buccaneers reigned as the foremost stringband in southwest Virginia throughout the remaining 1930s, displaying a diversity that included popular country songs, harmony vocals, yodeling, dancing and comedy. But the Buccaneers never forgot their musical roots, and each show also featured a set of old-time mountain fiddle tunes.