Find traditional instrumental music
This is the stable version, checked on 5 June 2019.
Jump to: navigation, search

Back to Gurreire Dance (The)

GURREIRE DANCE, THE. American, Country Dance (6/8 time). G Major. Standard tuning (fiddle). AABB. A patriotic composition by Charles P.F. O'Hara, who included eleven of his own tunes honoring American victories of the War of 1812, and politicians of the era, in his collection of mainly traditional Irish and Scotch tunes, sold from "his new music store" at No. 70 William Street, New York, "where may be had a great variety of the most ancient and modern single songs. Also a general assortment of flutes, violins, tambarines, drums, and all other musical instruments." Geoff Hore [1] (2009) remarks: 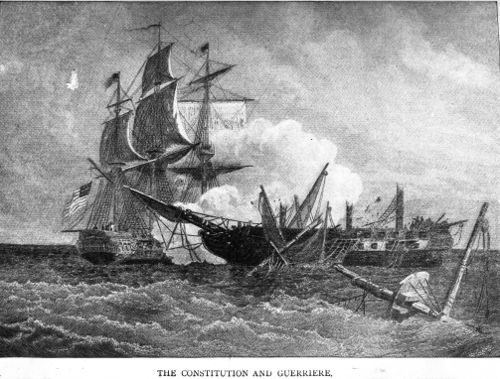 The Constitution and Guerriere

The fight between HMS Guerriere and USS Constitution [3] was one of the first naval engagements of the War of 1812, and a spectacular victory for the infant American navy. The Constitution was commanded by Isaac Hull and proved to be the superior vessel, with thicker sides and larger guns. It was during this engagement, when one cannon-ball bounced "harmlessly" off the side of the Constitution, that a crew member is said to have yelled "Huzzah! Her sides are made of iron!", thus bestowing on the ship the nickname 'Old Ironsides'.

Back to Gurreire Dance (The)