Find traditional instrumental music
This is the stable version, checked on 24 February 2021.
Jump to: navigation, search

Back to Guthrie Castle

GUTHRIE CASTLE. AKA and see "Space and Compass." Scottish, Reel. D Major. Standard tuning (fiddle). AAB. The tune with directions for a country dance was first printed in Edinburgh under the title "Space and Compass" by Robert Ross in his Choice Collection of Scots Reels and Country Dances (1780). It was repurposed by John Anderson forty years later for his Budget.

Guthrie Castle is a castle and country house in Angus, Scotland, near Forfar. 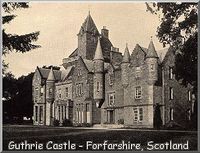 The original castle was a tower house built in 1468 by Sir David Guthrie (1435–1500), Treasurer and Lord Justice-General of Scotland. The castle remained in the hands of the Guthrie family until the late 20th century, who had added dwelling structures to the central tower over the years. A manor house was built up around the tower, with much of the present house dating to early Victorian times. The house is fully restored at present and is a popular venue for weddings and other events.

Back to Guthrie Castle