Find traditional instrumental music
This is the stable version, checked on 28 November 2019.
Jump to: navigation, search

HALLOW FAIR [2]. AKA - "Hollow Fair." Scottish, Air and Jig (6/8 time). A Major (Holden): A Mixoldyian (McLachlan). Standard tuning (fiddle). AABB. Hallow-fair is a fair held annually at Edinburgh, recorded as early as 1447, and also known as Alhallowmas Fair. It took place over two weeks in early November, on the fields off the Falkirk Road, west of the Grassmarket. Maidment, in his Scottish Ballads and Songs (1859, p. 220), remarks:

Hallow Fair, which is now peculiar to the metropolis, was held on the Calton Hill some fifty years ago. The little boys used to arm themselves with whips, and accompany the cattle to their place of destination in their passage through the city. The last Hallow Fair held on the Calton Hill was about the beginning of this century. A party of the City Guard, commonly called the Town Rats, accompanied the Magistrates when they went to proclaim the Fair. Part of the Civic force was left to maintain order, and when drawn up to march back, against the wall where the stair now is, were soundly pelted with stones by the blackguard boys from the top of the opposite rocks. 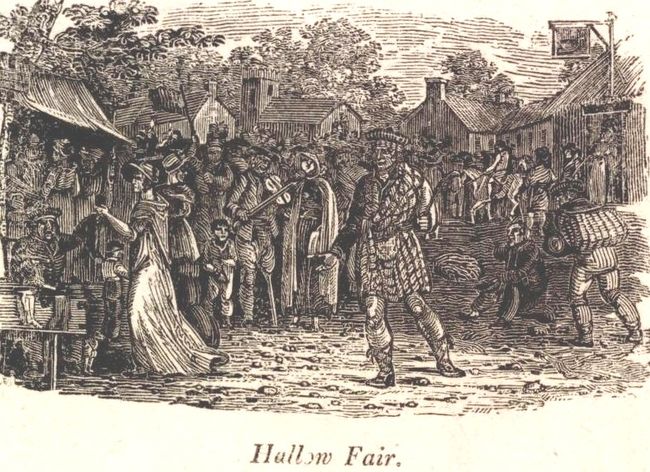 There's fouth o' braw Jockies and Jennies
﻿Comes weel-buskit into the fair,
With ribbons on their cockernonies,
﻿And fouth o' fine flour on their hair.
Maggie she was sae weel buskit,
﻿That Willie was tied to his bride;
The pownie was ne'er better whisket
﻿Wi' cudgel that hang frae his side.

But Maggie was wond'rous jealous,
﻿To see Willie buskit sae braw;
And Sandy he sat in the alehouse,
And hard at the liquor did ca'.
There was Geordie, that weel looed his lassie,
﻿He took the pint-stoup in his arms,
And hugged it, and said, Trouth they're saucie,
﻿That loes na a guid-father's bairn.

There was Wattle, the muirland laddie,
﻿That rides on the bonnie grey cowt,
With sword by his side like a cadie
﻿To drive in the sheep and the nowt.
His doublet sae weel it did fit him,
﻿It scarcely cam' down to mid-thie,
With hair pouthered, hat, and a feather,
﻿And housing at curpen and tee.

But Bruckie played boo to Bassie,
﻿And aff scoured the cout like the wind:
Puir Wattie he fell on the caussey,
﻿And birzed a' the banes in his skin.
His pistols fell out o' the hulsters,
﻿And were a' bedaubed wi' dirt,
The folk they cam' round him in clusters;
﻿Some leuch, and cried, Lad, was ye hurt?

But cout wad let naebody steer him,
﻿He aye was sae wanton and skeigh;
The packmen's stands he overturned them,
﻿And garred a' the Jocks stand abeigh;
Wi' sneerin' behind and before him,
﻿For sic is the mettle o' brutes,
Puir Wattie, and wae's me for him.
﻿Was fain to gang hame in his boots.

Now it was late in the e'ening,
﻿And boughting-time was drawing near;
The lasses had stanched their greening
﻿Wi' fouth o braw apples and beer.
There was Lillie, and Tibbie, and Sibbie,
﻿And Ceicy on the spindle could spin,
Stood glowrin' at signs and glass winnocks,
﻿But deil a ane bade them come in.

Gude guide us! saw ye e'er the like o't?
﻿See, yonder's a bonnie black swan;
It glow'rs as it wad fain be at us;
﻿What's yon that it hauds in its hand?
Awa', daft gowk, cries Wattie,
﻿They're a' but a ruckle o' sticks;
See, there is Bill-Jock and auld Hawkie,
﻿And yonder's Mess John and auld Nick.

Quoth Maggie, Come buy us our fairin';
﻿And Wattie richt sleely could tell,
I think thou'rt the flower o' the clachan,—
﻿In trowth, now, I'se gi'e thee mysell.
But wha wad ha' e'er thocht it o' him,
﻿That e'er he had rippled the lint?
Sae proud was he o' his Maggie,
﻿Though she was baith scaulie and squint.

The 6/8 melody printed by Stewart around 1775 may or may not be associated with Ferguson's song (e.g. as an alternate melody).