Back to Happy Days of Youth (1)

HAPPY DAYS OF YOUTH [1], THE. AKA and see "John McKenna's (2)," "Sean McKenna's (2)," "Seán McKenna's (1)," "McKenna's Reel (2)." Irish, Reel. G Major. Standard tuning (fiddle). AB (Miller & Perron): AAB (Moylan): ABAB'AB (Harker/Rafferty). The tune was recorded by flute player John McKenna [1] (1880-1947) for Decca in 1934 (paired with "Colonel Rogers"), accompanied by Michael Gaffney on banjo; both originally were from County Leitrim. In fact the tunes became so associated with the flute player's name that they have often simply been referred to as "John McKenna's" or "McKenna's Reels." The fidelity to which the tunes have become attached in tradition has led to some confusion between the titles of the generically titled "McKenna's Reels" (e.g. "Colonel Rogers" is sometimes called "Happy Days of Youth" and vice versa). McKenna and Gaffney were fast friends, remembers McKenna's daughter Catherine, who told Harry Bradshaw and Jackie Small that she could not remember a week that Gaffney was not in her father's house playing his banjo or rehearsing new numbers with the flutist for recordings, dances, weddings and other events they had booked. 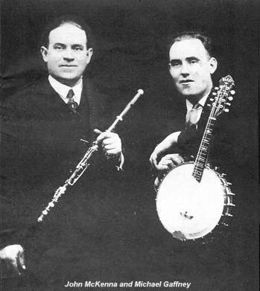 Back to Happy Days of Youth (1)