Back to Happy One-Step (The)[edit]

HAPPY ONE STEP. Cajun, One Step (4/4 time). USA, Louisiana. G Major. Standard tuning (fiddle). AABB. A very popular Cajun fiddler tune, especially over the past few decades, played by Michael Doucet and others. It was originally recorded by fiddler Dennis McGee along with Sady D. Courville (1905-1988) on 2nd fiddle in March, 1929, in New Orleans, billed as as 'Courville and McGee' on the label. 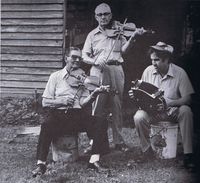 Back to Happy One-Step (The)[edit]