HARLYQUIN RANGER. AKA - "Harlequin Ranger." English, Jig. B Flat Major. Standard tuning (fiddle). AABB. Harlequin Ranger was a pantomime produced by David Garrick in London in 1751, a burlesque of Rich's Covent Garden pantomimes which mocked the entertainment of wire dancing and the antics of strange animal's in Rich's theatre. When Rich's friends attended Garrick's play, they attempted to disrupt the performance by throwing an apple at the comic actor Henry Woodward, who retorted with a sarcastic comment from the stage. A lawsuit ensued. The melody first appears in John Hinton's Universal Magazine of Knowledge and Pleasure (London, 1754). Subsequently it was published in John Johnson's 200 Favourite Country Dances, vol. 7 (London, 1756), and Charles and Samuel Thompson's 1757 country dance volume. In America, the tune was included in the 1788 music manuscript copybook of John and William Pitt Turner, fiddlers from Norwich, Conn. 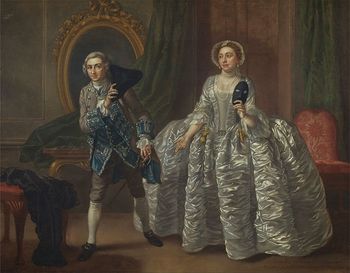 David Garrick as Ranger in Hoadly's comedy "The Suspicious Husband" (1747). By Francis Hayman. Ranger was a stock character of the mid-18th century London stage.