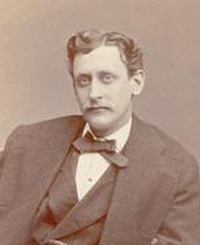 HARRY BLOODGOOD (Carlos Moran) was one of the most accomplished and versatile performers that ever blacked his face; good in everything he undertook; he could sing, dance and act. He made his first New York appearance at the American Theatre, and remained there one year. In May, 1866, he joined Boyce and Mudge's Minstrels; subsequently appearing with Sam Sharpley's , and later with Joseph Trowbridge, he had the Bloodgood and Trowbridge's Minstrels; their season ended July 16, 1871; Mr. Bloodgood then taking his own show, with which he travelled intermittently for several seasons.

In 1869 he also was associated with Delehanty, Hengler and Bloodgood's Minstrels. Mr. Bloodgood was without exception the most pronounced favourite that ever played the old Howard Athenaeum in Boston; he was in the stock there at various times, covering a period of several years. About 1881 he wrote and appeared in the play "Hix's Fix," sharing the lead with W.A. Mestayer; the piece afterwards called "Wanted, A Partner."

Mr. Bloodgood married Helene Smith, the danseuse, about 1864; they were divorced in the spring of 1867; and on January 20, 1870, in Boston, he married Clara Gettis, also a dancer. It was not until about three years later that he found connubial blessedness, when he married Lisle Riddell, with whom he lived most happily the balance of his life.

Mr. Bloodgood made a distinct hit playing Uncle Tom at the Boston Theatre, with an all-star cast. Harry Bloodgood was born in Savannah, Georgia, March 31, 1845; he died in North Conway, New Hampshire, June 12, 1886.