HAYWOOD SCHOTTISCHE. American, Schottische (4/4 time). D Major. Standard tuning (fiddle). AA'BB'. Composed by elderly fiddler Mellie Dunham [1] (1853-1931) of Norway, Maine. The elderly Dunham was Henry Ford's champion fiddler in the late 1920's, and received a great deal of press for a time through that association. Ford was interested in presenting old-time dancing and music as an alternative to the 'flapper' influences in American culture of the era. The schottische is named for the social club where Dunham played near his home. 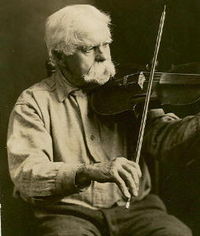