HEALTH [1], THE. AKA and see "Merry Wassail," "Merry Frolic." English, Country Dance Tune (4/4 or 2/2 time). G Major. Standard tuning (fiddle). One part. The tune was first published by Playford in his English Dancing Master (editions 1650-90) and Musick's Delight on the Cithren (1666). The tune and accompanying country dance directions continued to be published in editions of the Dancing Master through 1665, but commencing with the fourth edition of 1670 the title appears as "The Healths or Merry Wasel" [sic]. Researcher Anne Gilchrist remarks: "The tune of "The Healths" is evidently older than the song which Patrick Carey set to it, but the original words do not seem to be known" [1].

The title presumably refers to the salute or toast just prior to drinking in convivial atmosphere. Henry Cockburn (1779-1854), in his book Memorials of His Time (published posthumously in 1856), recalled the custom of toasting at the beginning of the 19th century, when he was a young man: 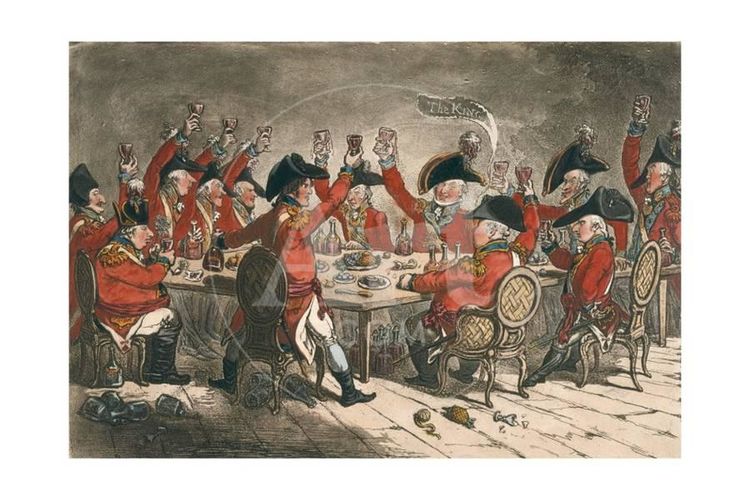 James Gillray. "Loyal Souls or A Peep into the Mess Room at St James"

Healths and toasts were special torments; oppressions which cannot now be conceived. Every glass during dinner required to be dedicated to the health of some one. It was thought sottish and rude to take wine without this-as if forsooth there was nobody present worth drinking with. I was present, about 1803, when the late Duke of Buccleuch took a glass of sherry by himself at the table of Charles Hope, then Lord Advocate; and this was noticed afterwards as a piece of dual contempt. And the person asked to take wine was not invited by anything so slovenly as a look combined with putting of the hand upon the bottle, as is practised by near neighbours now. It was a much more serious affair. For one thing, the wine was very rarely on the table. It had to be called for; and in order to let the servant know to whom he was to carry it, the caller was obliged to specify his partner aloud. All this required some premeditation and courage. Hence timid men never ventured on so bold a step at all; but were glad to escape by only drinking when they were invited. As this ceremony was a mark of respect, the landlord, or any other person who thought himself the great man, was generally graciously pleased to perform it to every one present. But he and others were always at liberty to abridge the severity of the duty, by performing it by platoons. They took a brace, or two brace, of ladies or of gentlemen, or of both, and got them all engaged at once, and proclaiming to the sideboard-"A glass of sherry for Miss Dundas, Mrs. Murry, and Miss Hope, and a glass of port for Mr. Hume, and one for me," he slew them by coveys. And all the parties to the contract were bound to acknowledge each other distinctly. No nods or grins, or indifference; but a direct look at the object, the audible uttering of the very words-"Your good health," accompanied by a respectful inclination of the head, a gentle attraction of the right hand towards the heart, and a gratified smile. And after all these detached pieces of attention during the feast were over, no sooner was the table cleared, and the after-dinner glasses set down, than it became necessary to drink the health of every other person present, individually. Thus, where there were ten people, there were ninety healths drunk. This ceremony was often slurred over by the bashful, who were allowed merely to look the benediction; but usage compelled them to look it distinctly, and to each individual. To do this well, required some grace, and consequently it was best done by the polite ruffled and frilled gentlemen of the olden time.

This prandial nuisance was horrible. But it was nothing to what followed. For after dinner, and before the ladies retired, there generally began what were called "Rounds" of toasts; when each gentleman named an absent lady, and each lady an absent gentleman, separately; or one person was required to match a gentleman with that lady, and the pair named were toasted, generally with allusions and jokes about the fitness of the union. And, worst of all, there were "sentiments." These were short epigrammatic sentences, expressive of moral feelings and virtues, and were thought refined and elegant productions. A faint conception of the nauseousness may be formed from the following examples, every one of which I have heard given a thousand times, and which indeed I only recollect from their being favourites. The glasses being filled, a person was asked for his, or for her, sentiment, when this or something similar was committed-"May the pleasures of the evening bear the reflections of the morning." Or, "May the friends of our youth be the companions of our old age." Or, "Delicate pleasures to susceptible minds." "May the honest heart never feel distress." "May the hand of charity wipe the tear from the eye of sorrow." "May never worse be among us." There were stores of similar reflections; and for all kinds of parties, from the elegant and Romantic, to the political, the municipal, the ecclesiastic, and the drunken. Many of the thoughts and sayings survive still, and may occasionally be heard at a club or a tavern. But even there they are out of vogue as established parts of the entertainment; and in some scenes nothing can be very offensive. But the proper 'sentiment' was a high and pure production; a moral motto; and was meant to dignify and grace private society. Hence, even after an easier age began to sneer at the display, the correct course was to receive the sentiment, if not with real admiration, at least with decorous respect. Mercifully, there was a large known public stock of the odious commodity, so that nobody who could screw up his nerves to pronounce the words had any occasion to strain his invention. The conceited, the ready, or the reckless, hackneyed in the art, had a knack of making new sentiments applicable to the passing accidents, with great ease. But it was a dreadful oppression on the timid or the awkward. They used to shudder, ladies particularly-for nobody was spared, when their turn in the round approached. Many a struggle and blush did it cost; but this seemed only to excite the tyranny of the masters of the craft; and compliance could never be avoided except by more torture than yielding. There can scarcely be a better example of the emetical nature of the stuff that was swallowed than the sentiment elaborated by the poor dominie at Arndilly. He was called upon, in his turn, before a large party, and having nothing to guide him in an exercise to which he was new, except what he saw was liked, after much writhing and groaning, he come out with-"The reflection of the moon in the cawm bosom of the lake." It is difficult for those who have been born under a more natural system, to comprehend how a sensible man, a respectable matron, a worthy old maid, and especially a girl, could be expected to go into company only on such conditions.

But the new generation gradually laughed the sentiments away; so that at last one could only be got as a curiosity, from some old-fashioned practitioner. They survived longer in male parties, especially of a wild character. Yet (Sir Walter) Scott, in presiding even at the grave annual dinners of the Bannatyne Club, always insisted on rounds of ladies and gentlemen, and of authors and printers, poets and kings, in regular pairs. Of course in that toasting and loyal age, the King was never forgotten, even though the company consisted only of the host and his wife and children. (pp. 32-36).