Find traditional instrumental music
This is the stable version, checked on 26 April 2022.
Jump to: navigation, search

Back to Heart of Oak

HEART(S) OF OAK (ARE OUR SHIPS). English; Air, March and Morris Dance Tune (4/4 time). D Major (Aird): C Major (Balmoral). Standard tuning (fiddle). AB. The tune is by Dr. William Boyce [1] (1711–1779) with rousing lyrics by David Garrick, inspired by England's naval victories of 1759 (the Year of Victories) at Lagos, Quiberon Bay and Quebec which restored the Royal Navy's glory and confirmed the security of the Empire in the "hearts of oak" and "jolly tars." It was first sung, according to Chappell (1859), in Harlequin's Invasion in 1759. Boyce was a London songwriter who rose to become the organist at the Chapel Royal and in charge of the King's Band of Musick, a position much earlier held by the great English composer Purcell. The melody appears in the Gillespie Manuscript of Perth, 1768. Other songs written to the tune are "Keppel's Triumph" and "Hardy Tars of Old England (the); or, The True Hearts of Oak." 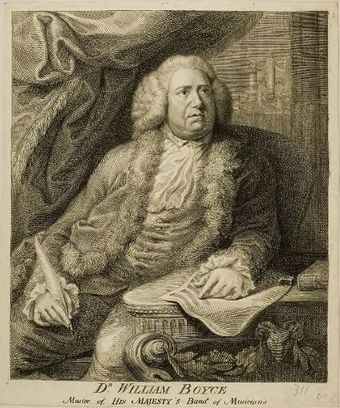 Come, cheer, up, my lads, 'tis to glory we steer,
To add something to this wonderful year;
To honour we call you, as freemen, not slaves,
For who are so free as the sons of the waves?
Heart of oak are our ships, Jolly tars are our men;
We always are ready.
Steady, boys, steady,
We'll fight and we'll conquer again and again.

The song was reset in 1768 by John Dickinson (founder of Dickinson College) prior to the American War for Independence and given patriotic words. His "The Liberty Song" was sung at political meetings, dinners and celebrations in the years leading up to the Revolution. The melody appears in the late 18th century manuscript copybook of Henry Livingston, Jr. Henry Livingston purchased the estate of Locust Grove, Poughkeepsie, New York, in 1771 at the age of 23. In 1775 Livingston was a Major in the 3rd New York Regiment, which invaded Canada in Montgomery's failed attempt to wrest Quebec from British control. An important land-owner in the Hudson Valley, and a member of the powerful Livingston family, Henry was also a surveyor and real estate speculator, an illustrator and map-maker, and a Justice of the Peace for Dutchess County. He was also a musician and presumably a dancer, as he was elected a Manager for the New York Assembly's dancing season of 1774–1775, along with his 3rd cousin, John Jay, later U.S. Chief Justice of Governor of New York.

Come, join hand in hand, brave Americans all,
And rouse your bold hearts at fair Liberty's call;
No tyrannous acts shall suppress your just claim,
Or Stain with dishonour America's name.
In freedom we're born, and in freedom we'll live!
Our purses are read- steady, friends, steady;
Not as slaves, but as free men, our money we'll give.

Chappell records that Dr. Johnson's biographer, James Boswell, sang the song while on a visit to Corsica, when he was requested to sing an English song: "Never did I see men so delighted with a song as the Corsicans were with 'Hearts of Oak'. 'Cuore di querco' cried they, 'bravo Inglese'. It was quite a joyous riot. I fancied myself to be a recruiting sea-officer—I fancied all my chorus of Corsicans aboard the British fleet."

Back to Heart of Oak