Find traditional instrumental music
This is the stable version, checked on 18 July 2021.
Jump to: navigation, search

HEN'S MARCH TO/O'ER THE MIDDEN, THE. AKA and see "Cackling of the Hens (The)," "Duck's in the Midden (The)," "Hen's Concert (The)," "Hen's March," "Major Hen's March," "Tick tick tickalairy." Shetland, English, Irish, Scottish (originally); March or Novelty Tune (4/4 time). England, Northumberland; Ireland, northern Ireland. D Major. Standard tuning (fiddle). AB (Hunter): AAB (Cooke): AAB (Milne): ABB (Alburger, Phillips): AABB (Johnson): AABB' (Martin). Hunter (1988) says it is "undoubtedly one of the most popular pieces in the fiddler's 'entertainment repertoire.'" The second strain attempts to musically describe chicken clucks. Alburger and David Johnson's versions are set for two violins and continuo, and are from the earliest Scottish collection--Robert Bremner's (c. 1713-1789) Collection of Airs and Marches (c. 1756-1761, p. 64). Johnson (1983) states that Bremner may have either composed it or arranged it, although Purser (1992) thinks it probably was the work of James Oswald. It was known to almost every Scots fiddler in the 18th century, writes Johnson. Alburger also suggests that the idea for the tune "may have come from a brief motif called "The Hen's March, or Farmyard" form the pantomime Fortunatus, performed at Drury Lane in London in 1753, and published by Oswald" (Alburger, 1983). Johnson (1983) places Bremner's composition in context, for there was a general vogue for interpreting bird calls in European music in the 18th century; also, the first several bars of the tune are typical of trumpet marches that were then currently popular in London. If Bremner was influenced by the pantomime Forunatas, whose "Hen's March" is admittedly similar to his tune, then Johnson gives him credit for fashioning the definitive form in Scotland. 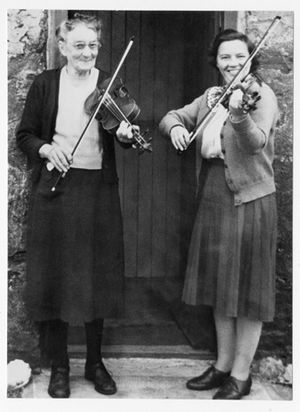 Jean Pole o' Waas (L) with Scottish fiddler Betty Henderson, early 1960's.
Musicologist Peter Cooke claims the tune, while of British origins, survived in Shetland in near original form and was reintroduced to the Scottish mainland "as much by the playing of Tom Anderson as by anyone else. His setting is close to that published by Walsh in his Third Book ({1730}, p. 19, where it is called 'Cackling of the Hens (The)'), although not as close as another variant recorded by Tom Anderson from Miss Jean Pole" (Cooke, 1986). The tune is called "Da Hens’ Mairch Owre da Midden" in the Shetlands, but fiddler Jean Pole o' Waas (1880-1965, Stove, Walls, Shetland) called it "Da Chickie Reel."

The tune appears in O'Farrell's Pocket Companion for the Uilleann or Union Pipes, c. 1811-1816 as "The Hen's Concert," and despite that O'Farrell was an Irish uilleann piper, there is no particular reason to believe it has an Irish provenance. Rather, Ulster versions (c.f. John Doherty) seem to be later imports from Scotland. Paul Wells finds the tune in the United States in a music manuscript from New England, c. 1823, under the title "Cacklin' Hen," in an 1834 flute tutor published in Albany as "Major Hen's March," and in a guitar tutor of 1863 by the 19th century publisher Elias Howe of Boston as "Hen's March (The)." The Northumbrian version printed by Bruce & Stokoe and musician John Rook's manuscript version (Waverton, Cumbria) are very similar; the version must have been popular in northern England in the 19th century.