Back to Herr Cline's Celebrated Dance

HERR CLINE'S CELEBRATED DANCE. American, Jig (6/8 time). G Major. Standard tuning (fiddle). AB. "Herr Cline's Celebrated Dance" was first printed in Philadelphia, Pa., in the early 1830's by music publisher George Willig, and in New York by Edward Riley, as well as other publishers. The title refers to a rope dancer of some renown, John Cline (?-1886), who first performed in the United States beginning around 1827, and remained a viable stage performer until about the time of the Civil War. The composer of what must have been his theme music is unknown. 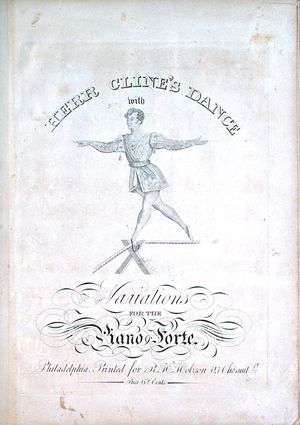 Franklin Graham, in his Histrionic Montreal: Annals of the Montreal Stage (1902) gives:

HERR JOHN CLINE presented an address and gentlemanly gracefulness on the rope that was new here, and his work was the general theme of eulogy. He was highly polished in style and attitude, copying classical statues of ancient masters. He subsequently appeared at Guilbault's Gardens, situated on St. Lawrence street, above Sherbrooke street, for a short time. His brother, Andre, was the Louis Cyr [Ed. a celebrated strong-man] of that period. Herr Cline was born in London, England, and made his American debut at the Bowery Theatre in 1828. He retired in 1862, but, having lost his savings, was compelled to return to rope dancing at an age when most others are satisfied to be able to walk at all.

The jig was entered into the 1859 music manuscript copybook of American musician M.E. Eames (p. 75). Nothing is known of Eames, although some of the tune (such as this one) suggest Philadelphia connections.

Back to Herr Cline's Celebrated Dance