Higher Up the Monkey Climbs

Back to Higher Up the Monkey Climbs

HIGHER UP THE MONKEY CLIMBS. AKA and see "Seneca Square Dance." American, Reel (cut time). B Flat Major. Standard tuning (fiddle). AB. The tune, a version of (and perhaps precursor to) the well-known "Seneca Square Dance," is from "Uncle" Bob Larkan (1867-1942), of Prairie County, central Arkansas. Gus Meade notes that "the tune of the chorus for the song is 'Shoot that Turkey Buzzard', which also contains the monkey motif."

Larkan (the correct spelling, although recording companies and newspaper notices were wont to spell it 'Larkin') was born in New York City, but moved to Arkansas with his family as a toddler. He married at age 21 and moved to Prairie County in that state, where he resided for the rest of his life with his wife Hattie. Their nine daughters and five sons formed the base of the family music group 'The Music Makers', and accompanied him at live appearances, on radio broadcasts and on his 1928 OKeh recordings. Larkan and the Music Makers teamed up with two quack medicine practitioners, helping to sell spurious cures and expensive procedures in the 1920's and 1930's, until they were forced off the airwaves (they even resided in Mexico for a time, moving to avoid being shut down). Larkan's health worsened in the late 1930's, and he succumbed to asthma in 1942. 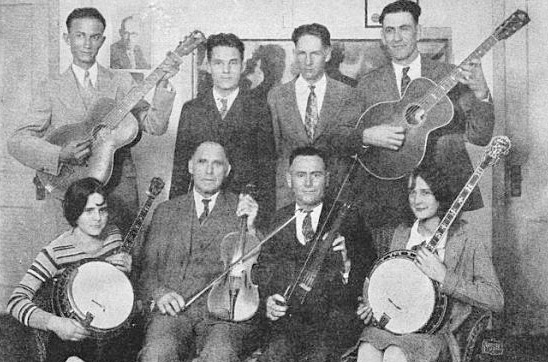 His obituary notes that Larkan was an avid sportsman and a champion skeet shooter. He also was proclaimed 'champion fiddler of Arkansas' after a poll of radio audiences 1927. "Higher up the Monkey Climbs" "became notorious for its suggestive, ribald lyrics"[1], however the only verse to make it on the recording was:

The singer was not credited on the recording, but was either Larkan or one of his daughters. The phrase "the higher up the monkey climbs, the more he shows his tail is a version of the folk rhyme:

Anthony Trollope, Victorian novelist, has one of his characters utting: “The higher up the monkey climbs - well, you know the saying.”

Back to Higher Up the Monkey Climbs