Highland Brigade's March to the Battle of Alma (The)

HIGHLAND BRIGADE'S MARCH TO THE BATTLE OF ALMA. Scottish, Pipe March (2/4 time). A Mixolydian. Standard tuning (fiddle). AABB'. Composed by William Ross in commemoration of the march of the Black Watch (42nd Highlanders), Sutherland Highlanders, and the Cameron Highlanders to the Crimean War battle of Alma. On 20th September, 1854, the Highland Brigade reached the River Alma overlooked by the Russians. Under very heavy fire the 93rd (Sutherland) reached the summit and then charged the enemy. After fierce hand to hand fighting, the Russians abandoned their positions to the 93rd and the battle was won. 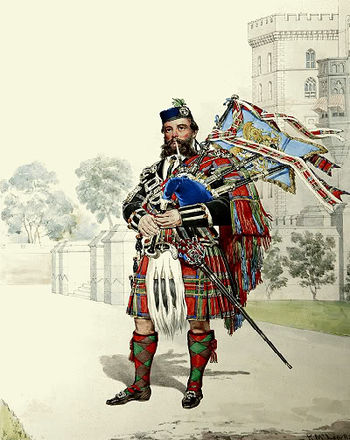 Curiously, the English had for some years had a liking for spectacular stage recreations of grand historical events. Extremely popular, this form of entertainment probably helped to explain events to a population that was still largely illiterate. The military melodrama reached its zenith with the recreation of the Battle of Alma at Astley's in London, staged in 1855 with a cast that included four hundred extras.