Back to Highwayman (The) 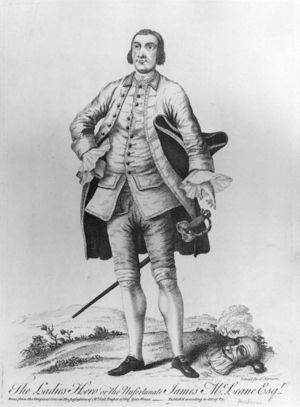 after Unknown artist, etching and line engraving, 1750 or after
HIGHWAYMAN, THE. English, Country Dance Tune (3/8 time). D Major. Standard tuning (fiddle). AABBC. In view of the fact that the editor of The London Magazine, Richard Baldwin, in whose periodical this country dance and tune appears, frequently printed dance/tune titles that referred to topical events, the title undoubtedly refers to "Captain" James MacLaine (1724-1750), who was hanged at Tyburn in October, 1750, the month before Baldwin printed the tune. MacLaine, who got into financial difficulty due to living beyond his means in hopes of finding a wealthy wife, was known as the "Gentleman Highwayman" due to his courteous behavior during his robberies, committed with accomplice William Plunkett, a bankrupt apothecary. He famously robbed Horace Walpole, but was caught (owing to his trying to pawn goods that were recognized), tried and executed at Tyburn in 1750. He reputedly received nearly 3,000 guests while imprisoned at Newgate.

Back to Highwayman (The)