Hockley in the Hole

Back to Hockley in the Hole[edit]

HOCKLEY IN THE HOLE. English, Country Dance Tune. The tune was published in John Playford's English Dancing Master (1651) and was retained in the long running series through the 10th edition of 1698, then published by son Henry. The title refers to a 'hole', a well and public pleasure-garden of ill-repute north of old London near Clerkenwell Green, once in a marshy district in modern times absorbed by the city sprawl. "There assembled on Sundays and holidays, the Smithfield butchers, the knackers of Turnmill Street, and the less respectable citizens of Field Lane, for dog-fights and pugilistic encounters. 'That men may be instructed by brutes, Aesop, Lemuel Gulliver, and Hockley-in-the-Hole, shew us' says the author of The Taste of the Town, 1731; adding with satiric slyness: 'Who can view dogs tearing bulls, bulls goring dogs, or mastiffs throttling bears, without being animated in their daring spirits.' It became the very type of low blackguardism, and was abolished by the magistracy at the close of the last century" (R. L. Chambers, Book of Days, vol. 2, 1863). Hogarth's print depicts a similar setting. 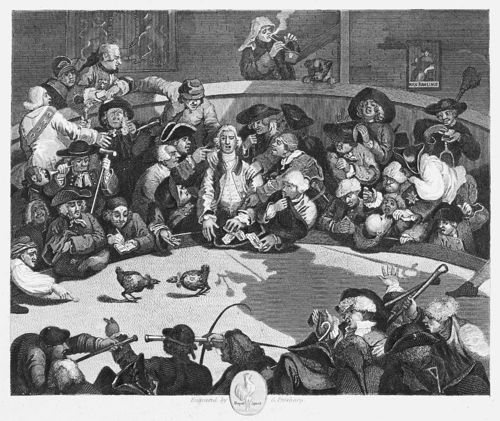 The place is mentioned in one of Gay's Fables:

Both Hockley-hole and Marybone
The combats of my dog have known.

Back to Hockley in the Hole[edit]