Hog Eye an' a 'Tater

Back to Hog Eye an' a 'Tater

HOG EYE AN' A 'TATER. AKA and see "Hog Eye (2)," "Hog Eyed Man," "Granny Will Your Dog Bite? (1)" (Pa. floating title), "Fire on the Mountain" (Pa. floating title), "Boating Up Sandy (3)." Old-Time, Breakdown. USA, southwestern Pennsylvania. A Dorian ('A' part) & A Mixolydian or Major ('B' part). Standard tuning (fiddle). AB. A widespread modal tune and song with several variants and titles in the upland South that shifts between dorian and mixolydian, and, in some cases, dipping into major tonality. The song is quite old, and is related to "Hog Eye (1)." Researcher Gus Meade found it published under the title “Hog-Eye Jig” as early as 1853 in Septimus Winner’s Winner’s Collection for the Violin. It was first recorded by Crockett’s Kentucky Mountaineers in November 1928 (Meade 2002, 706). Samuel Bayard [1] remarks: "This is not the melody which accompanies the well known and often recorded sea shanty called 'Hog Eye', nor is it the play-party song tune with a similar name known farther south (see Sharp-Karpeles, English Folk Songs from the Southern Appalachians, II, No. 250). A somewhat different version, with the parts in reverse order, is in Bayard Coll., No. 288, from Greene County, where the title is simply 'Hog Eye', and has an indecent meaning. In Fayette County, this tune has the following associated rhyme: 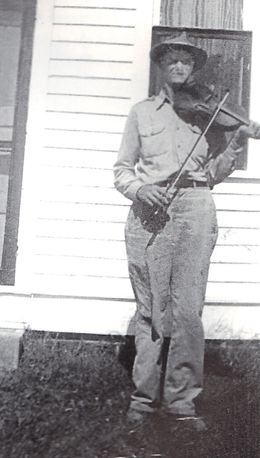 I went down to Sally's house


'Bout ten o'clock or later;
All she had to give to me
Was a hog-eye and a tater.

The rhyme accompanying the set known in Greene County, Pa., is: 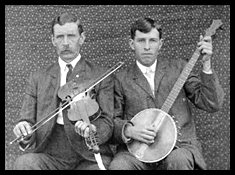 Alan Jabbour, like Meade, also noted [American Memory] that a nineteenth-century setting of the tune appears in Winner's Collection of Music for the Violin (p. 75) as "Hog Eye--Jigg" ('Jig' refers here to a syncopated duple-time dance tune and not the 6/8 Irish jig). It suggested to Jabbour that the song may have had some circulation on the popular stage, although he believed it may have been picked up by stage performers from tradition, and not the other way around. Glen Lynn, Virginia, fiddler Henry Reed's version is quite close to the one played by southwest Pennsylvania fiddler Irvin Yaugher.


See also listing at:
Jane Keefer's Folk Music Index: An Index to Recorded Sources [1]
Hear Luther Strong, recorded in the field in 1937 by Alan and Elizabeth Lomax for the Library of Congress [2] and at Slippery Hill [3]
See Henry Reed's transcription and Alan Jabbour's notes at the American Memory website [4] [5]
Hear Alan Jabbour's 1966 recording of Henry Reed playing the tune [6]

Back to Hog Eye an' a 'Tater