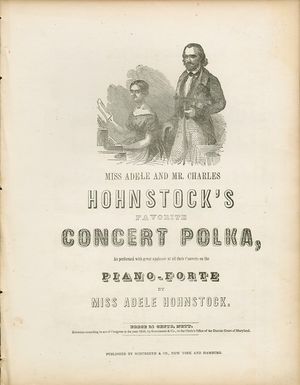 The Hohnstocks (mother, Adele and Carl) came to the United States in 1848 from Brunswick, Germany, and settled in Philadelphia, Pa., soon entering the musical world of that city. As Carl's obituary in Brainard's Musical World (Oct., 1889) remarked, "They were truly artists, both by nature and attainments, while their characters were such, that one could no help admire them." Adele died of consumption, and Carl returned to Brunswick when the American Civil War broke out, where he continued to compose.

The Philadelphia newspaper The Evening Argus gave the following tribute on Adele's death in 1856:

Miss Adele and her brother Karl were born in the old city of Brunscwick, in the duchy of that name--received instructions from the celebrated masters of that artistic though small city, and at a very early age gave indication of that superior excellence which soon spread their fame abroad. They traveled in Europe, giving concerts with much success, and were finally induced to visit this country, where, owing to mismanagment of their business concerns, their success was not commensurate with their just merits.

A tour to the South, under the direction of a gentleman of this city, at one time promised to place them in their proper position; but, unfortunately, the fatigue and exposure of travel reproduced in Miss Adele dangerous symptoms of a disease, supposed to have been contracted in the damp climate of Holland, and forced the immediate return of the brother and sister to the hospitable roof of their friend, Dr. Albert Fricke, of this city, whose professional efforts, aided by the skill of Dr. Jackson, partially restored her health. This was in the winter of 1850, and when the writer of this took leave of this talented young lady as she departed from Charleston, S.C., he little expected to again enjoy her delightful performances and agreeable society. But she has been spared six long years, mainly owing to good medical advice and careful nursing.

Philadelphia has been happy in the possession of such talent as the Hohnstocks. Karl we esteem as a genius of rare caliber, both as a violinist and composer. Adele was pianist of the highest rank.

The polka was entered into the 1859 music manuscript collection of American musician M.E. Eames.