HOMETOWN BLUES. American, Reel or Country Blues. D Major. Standard tuning (fiddle). AA'B. "Hometown Blues" is a fiddle blues tune (a cross between a reel and a blues tune, with a rhythm like a breakdown but with a blues scale, often with held or emphasized 'blue notes' and a sometimes irregular part structure). "Bob's Special" and "Lee Highway Blues" are related tunes. In fact, an inter-weaving of "Hometown Blues" and "Lee Highway Blues" has been recorded by fiddler Art Wooten, and by the New Lost City Ramblers (on their 1973 album "Remembrance of Things to Come", Folkways FTS 31035). The melody was recorded October, 1928, in Johnson City, Tennessee, by the group the Roane County Ramblers (from Roane County, Tennessee, in the heart of coal country). At the time the group consisted of Luke Brandon (guitar), Howard Wyatt (banjo), John Kelly (mandolin) and Jimmy McCarroll (fiddle). McCarroll, born in 1892 was an expert fiddler who claimed Cherokee ancestry and had a farm near Oak Ridge. He was known to be something of an eccentric. The group only recorded for the years 1928-29, but McCarroll continued to fiddle. He and his band at the time can be seen and heard in a cameo [1] in the 1970 film "A Walk In the Spring Rain" (starring Anthony Quinn and Ingred Bergman), playing "Devil's Dream (1)." 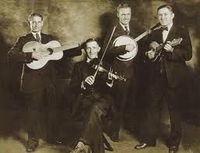