HONORABLE HENRY ERSKINE'S FAVORITE, THE. Scottish, Jig. E Flat Major. Standard tuning (fiddle). AABB. Composed by Scottish fiddler-composer John Pringle. Henry Erskine [1] (1746-1817) was a Scottish lawyer, politician, and administrator, as well as a poet, of whom it was said that "no poor man wanted a friend while Harry Erskine lived." His country residence was Almondell, in Linlithgowshire. 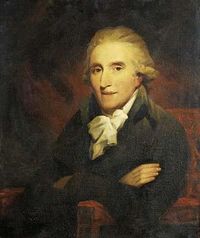 His relative, Henry David Inglis, wrote a memorial of him, printed in the Edinburgh Literary Journal, and, in discussing the keenness of his mind, noted:

Few men have ever enjoyed a wider reputation for wit than the Honourable Henry Erskine; the epithet then, and even now, applies to him, par excellence, is that of the witty Harry Erskine; and I do believe, that all the puns and bon mots which have been put into his mouth – some of them, no doubt, having originally come out of it – would eke out a handsome duodecimo. I well recollect, that nothing used to distress me so much as not perceiving at once the point of any of Mr Erskine’s witticisms. Sometimes, half an hour after the witticism had been spoken, I would begin to giggle, having only then discovered the gist of the saying. In this, however, I was not singular. While Mr. Erskine practiced at the bar, it was his frequent custom to walk, after the rising of the courts, in the Meadows; and he was often accompanied by Lord Balmuto – one of the judges, a very good kind of man, but not particularly quick in his perception of the ludicrous. His lordship never could discover at first the point of Mr Erskine’s wit; and, after walking a mile or two perhaps, and long after Mr Erskine had forgotten the saying, Lord Balmuto would suddenly cry out, ‘I have you now, Harry – I have you now, Harry!’ – stopping, and bursting into an immediate fit of laughter.

Erskine was an amateur, although very good, performer on the violin. Inglis remembered:

I think I scarcely ever entered the hall along with him that he did not take down his Cremona—a real one, I believe—which hung on the wall, and, seating himself in one of the wooden chairs, play some snatches of old English or Scottish airs; sometimes, ‘Let’s have a dance upon the heath’ an air from the music in Macbeth, which he used to say was by Purcel, and not by Locke, to whom it has usually been ascribed – sometimes, ‘The flowers of the forest’ or ‘Auld Robin Gray’ – and sometimes the beautiful Pastorale from the eighth concerto of Corelli, for whose music he had an enthusiastic admiration. But the greatest treat to me was when, after dinner, he took down from the top of his bookcase, where it lay behind a bust, I think, of Mr Fox, his manuscript book, full of jeus d’esprit, charades, bon mots, &c., all his own composition. I was then too young, and, I trust, too modest, to venture any opinion upon their merits; but I well recollect the delight with which I listened, and Mr Erskine was not above being gratified by the silent homage of a youthful mind.