Honorable Mrs. Graham of Balgowan (The)

Find traditional instrumental music
This is the stable version, checked on 15 September 2020.
Jump to: navigation, search

Back to Honorable Mrs. Graham of Balgowan (The)

HONORABLE MRS. GRAHAM OF BALGOWAN. Scottish, Reel. D Mixolydian. Standard tuning (fiddle). AABCCD. Composed by Daniel Dow. Mary Cathcart (1757-1792), second daughter of the 9th Earl Cathcart (ambassador to Catherine the Great), married Thomas Graham, 1st Baron Lynedoch, on the 26th of December, 1774, the same day her elder sister married the Duke of Athole. Thomas inherited a fine estate in the valley of the Almond, and was content to work on improving it, sporting, and attending to the classics. Their marriage appears to have been a love match for both, and he has been described as a solicitous husband. Notably, when his wife discovered on the morning of an Edinburgh ball that she had left her jewel-box at Balgowan, he rode the ninety miles to and from Balgowan using relays of horses to ensure that she would have her jewellery at the ball. "Mrs. Graham’s health began to decline, and on the recommendation of her medical adviser she went, in the spring of 1792, to the south of France, along with her husband and sister. Despite this course of action, she died on board ship, off the coast near Hyères, on 26 June 1792. Her sorrowing husband hired a barge to take the casket to Bordeaux but near Toulouse a group of French soldiers opened the coffin and molested the body. He closed the casket and returned home to deposit her remains in a mausoleum, which he built in the churchyard of Methven, where, after the lapse of upwards of half a century, he would himself be laid in the same tomb." [[1]]

The griefstricken Graham concentrated on the military, rising to the rank of General and participating effectively and heroically in the Napoleonic Wars. In fact, prior to the incident in Toulon he had sympathized with France and the ideals of the French Revolution, but afterwards the country became anathema, and his military career is seen in part as revenge for the atrocity. Mrs. Gramham's portrait was painted twice by Thomas Gainsborough, albeit the first was a study for the full-length portrait which hangs in the National Galleries of Scotland, Edinburgh-it shows Mary as an extremely beautiful young woman, some few weeks after her marriage to Thomas. After her death Graham could not bear to have the portraits in the house, and had them crated and sent away for safekeeping, where they remained for decades. After his death in 1842 the portrait was rediscovered by his heir, and donated to the museum, with the proviso that it never leave Scotland. 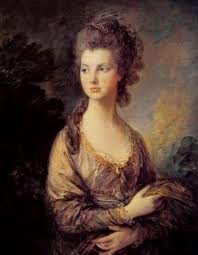 Back to Honorable Mrs. Graham of Balgowan (The)