Find traditional instrumental music
This is the stable version, checked on 1 June 2019.
Jump to: navigation, search

Back to Honorable Mrs. Leslie Cuming (The)

HONORABLE MRS. LESLIE CUMING. Scottish, Jig (6/8 time). F Major. Standard tuning (fiddle). AABB. "Composed and communicated by Mr. Boswell of Auchinleck" (Gow, 1817). This is the James Bowswell [1], a lawyer, who was a journalist, writer and anamnesis to Dr. Samuel Johnson (see also the Irish-style song "<incipit title="load:Shelah" width=850 link="https://tunearch.org/wiki/Shelah O'Neal">Shelah O'Neal</incipit>"--composed by Bowell's son, Alexander--for more). Mrs. Leslie Cuming, to whom the tune is dedicated, was the sister-in-law of Alexander Boswell, and the eldest of the five Cumings sisters. She and Lady Boswell became embroiled in a complicated legal battle that took years to sort out, when her wealthy father, George Cumings, died in 1811, unmarried and intestate (his only son having predeceased him). Leslie died in 1863. 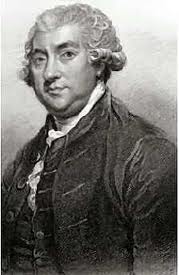 Boswell is said to have played the violin, and did play the flute, although strictly an amateur musician. In 1765 he visited Florence, Italy, and (as her recorded in a letter to Rousseau) he had met "one of the best teachers of the flute in Europe, [Nicolas] Dothel, a Lorrainer. He gave me several lessons, and started me on a good plan of study." Later in the same letter he notes that while in Siena a "'professor' of music, who had very fine taste, came to me every afternoon, and we sang and played fine airs on the flute. Little by little I shall come to know something of music. I can already amuse myself with it tolerably. I lack application, but that will come." Later that same year Boswell found himself in Corsica, and, while hiking in the interior he fell in with the rebel general Pasquale Paoli; the two became fast friends, with Paoli visiting Scotland at a later date. Boswell records in his Journal of a Tour of Corsica:

One day they [the Corsican rebels] would needs hear me play upon my German flute. To have told my honest natural visitants, ”Really, gentlemen, I play very ill,” and put on such airs as we do in our genteel companies, would have been highly ridiculous. I therefore immediately complied with their request. I gave them one or two Italian airs, and then some of our beautiful old Scots tunes: ”Gilderoy”, ”The Lass of Patie's Mill”, ”Corn rigs are bonny”. The pathetic simplicity and pastoral gaiety of the Scots music will always please those who have the genuine feelings of nature. The Corsicans were charmed with the specimens I gave them, though I may now say that they were very indifferently performed. My good friends insisted also to have an English song from me. I endeavoured to please them in this too, and was very lucky in that which occurred to me. I sung them ”Hearts of oak are our ships, Hearts of oak are our men.” I translated it into Italian for them, and never did I see men so delighted with a song as the Corsicans were with the Hearts of Oak.

Back to Honorable Mrs. Leslie Cuming (The)