HONOURABLE SEYMOUR EGERTON, THE. Scottish, Reel. F Major. Standard tuning (fiddle). AAB. The Honourable Seymour John Grey "Sim" Egerton, 4th Earl of Wilton (1839–1898) was a peer of the United Kingdom. "He was the owner and namesake of the Lord Wilton violin. A musician, he was an associate of Arthur Sullivan, of Gilbert and Sullivan. His wife Laura Caroline (1842–1916), daughter of William Russell and and Emma Campbell, was a noted beauty in the contemporary society scene" [1]. He is recorded (by the Auckland Evening Star, May 29, 1874) as conducting an amateur choral concert for a church organ benefit, on a visit to Australia. 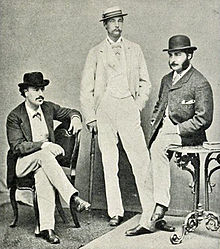 "Seymour Egerton in the 1860's, standing between Frederic Clay on the right and Arthur Sullivan on the right" (Wikipedia)

The reel was composed by Alexander Walker, born in Rhynie, Strathbogie, Aberdeenshire in 1819. Walker was an inventor (of surveying instruments, for example), agriculturalist, fiddler and composer of works collected in a volume published in Aberdeen in 1866. He was employed as a gardener for Sir Charles Forbes at Castle Newe, who was also his patron. While in Scotland he took a wife, Jean (11 years his junior), and at age 40 became father of a daughter, Maggie, followed by three sons (Charles, Alexander and George—Charles perhaps named after Sir Charles Forbes). Walker knew a young J. Scott Skinner, who was employed as a dancing master for the tenantry of the Queen’s residence at Balmoral, and co-wrote a tune with him. Walker himself played in bands for entertainments given by the Royal Family [Allan Thomas, A New Most Excellent Dancing Master, 1992 ].