Find traditional instrumental music
This is the stable version, checked on 30 May 2020.
Jump to: navigation, search

Back to Hook and Line

HOOK AND LINE. AKA and see "Banjo Sam," "Fish on a Hook," "Mr. Catfish," "Shout Lula/Shout Lulu." Old-Time, Breakdown. USA; Piedmont region of N.C., east Tennessee, western Virginia, northern & eastern Kentucky. GDad tuning (fiddle). Charles Wolfe (1982), writing on the country music of Kentucky, describes it as a driving banjo tune that was recorded by eastern Kentucky musicians in the 1920's. It has been said of that tune both that it was "Heard in many parts of the South but relatively rare" (Kerry Blech), and that it is "said to be the tune all Kentucky banjo players learn on" (Bill Mansfield). "Hook and Line" was in the repertoires of North Carolina musician Dock Boggs (as "Shout Lula") and of African-American fiddler Joe Thompson (who played it in FCgd tuning). Hobart Smith also fiddled the tune, as "Katy Went Fishing with Her Hook and Line," and said "It's a real old piece, handed down from my fathers." Mike Yates (2002) says the song may be based on an early minstrel tune called "My Old Dad," with African-American origins echoed in the version collected by Cecil Sharp from Ebe Richards of Callaway, Franklin County, Virginia, in 1918. Richards knew the song under the title "Jackfish (The)" (i.e. a chain pickerel), with the chorus:

Fish on a hook, fish on a line,
Fish no more 'til the summer time.

Throw my hook to the middle of the pond,
Fish for the girl with a josy on.

See that catfish a-going upstream,
What in the hell does a catfish mean?

The east Tennesse group The Dykes Magic City Trio, who recorded the tune for Brunswick Records in 1927, sang:

Shout, Lula, shout, shout
What in the world are you shoutin' about.

A version with a similar opening was collected in 1905 in Kentucky, from the MS of C.B. House:

Give me the hook; give me the line;
Give me the gal they call Caroline.
Set my hook, give it a flip;
First thing I knowed, Dad's old lip.
Hook would break; pole would bend;
Bottom of the river old Dad would send.
Nigger went a-fishing on a summer day;
Creek turned over, and the fish got away.
Nigger went a-fishing in the summer time;
Creek turned over, and he went blind.
I went to the river and couldn't get across;
Jumped on a 'possum, and thought he was a horse.
The river was deep, and the bottom was sand;
You ought to seed that 'possum racking through the land.

Basom Traywick (Marshville, Union County, North Carolina) used to perform the song/tune with his father at fiddling conventions and parties in the very early 20th century. The line he remembered was similar to Dykes' Magic Trio:

Stradle the hook, straddle the line,
Give me the gal they call Caroline. 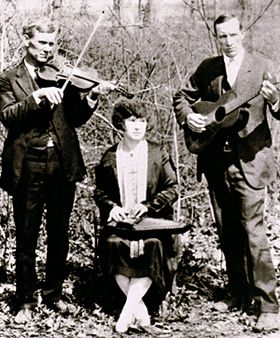 Back to Hook and Line