Back to Hooly and Fairly[edit]

HOOLY AND FAIRLY. AKA and see "Ballyhooley," "Drunken Wife o' Galloway." Scottish, English; Air. England, Northumberland. A 19th century song, the style and chorus "borrowed from "The Drucken Wife o' Gallowa'," a song which first appeared in the [Yair's] Charmer, a collection of songs, published in Edinburgh in 1751, but the authorship of which is unknown" [The Scottish Minstrel: The Songs of Scotland Subsequent to Burns, 1882, p. 43]. The authorship of the "Hooly and Fairly" adaptation has been attributed to dramatist Joanna Baillie (1762-1851), however the first printing of "Hooly and Fairly" predates her and appears in Robert Bremner's Scots Songs (1757). The tune is thought (by Rober Burns & Robert Riddell, Notes on Scottish Song) to have been taken from the air of "To horse, brave boys of Newmarket, to horse," a song that was printed by Thomas D'Urfey in Pills to Purge Melancholy (1719, vol. 1, p. 332). James Oswald printed versions in his Caledonian Pocket Companion, Book 5 (1760, p. 32) as "Faith I defie thee," and again in Book 10 of the same series, as "Drunken Wife o' Galloway." 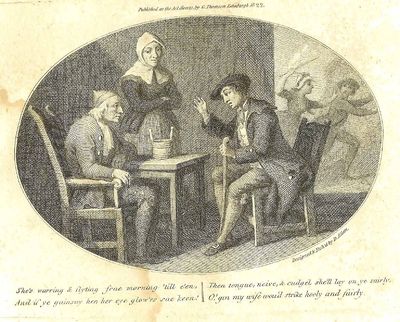 The caption to the picture at left is a verse from the song, and reads:

She warring and flyting frae morning 'till e'en
And if ye gainsay her, her eye glow'rs sae keen;
Then tongue, neive & cudgel she'll lay on ye sairly,
O! gin my wife wou'd strike hooly and fairly.

The title appears in Henry Robson's list of popular Northumbrian song and dance tunes ("The Northern Minstrel's Budget"), which he published c. 1800. In the North West, it was entered into the 1840 music manuscript collection of Waverton, Cumbria, musician John Rook. It is listed as an alternate title for the jig "Ballyhooley" in O'Neill's Dance Music of Ireland: 1001 Gems (1907).

Back to Hooly and Fairly[edit]