The title may refer to Horsey-down, or Horselydown [1], Southwark, London, anciently used as a pasture by the neighboring inhabitants for their horses and cattle. It was part of the possessions of the abbey of Bermondsey surrendered to King Henry VIII in 1537. It then went into private hands and let as a farm, and then came into the possession of the Governors of St. Olave's Grammar School. It may have been the site, for a time of the Southwark Fair [Sylvanus Urban, The Gentleman's Magazine and Historical Review, vol. 199, 1856, p. 66.]. The following passage is from Edward Walford's Old and New London (1878): 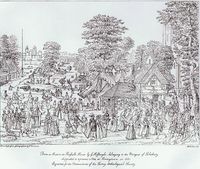 Passing from Snow's Fields, under the railway arches, by way of Crucifix Lane, a name which savours of "the olden time," we enter Artillery Street, Horselydown, or, as it was formerly called, Horsey Down. The parish of St. Olave's having greatly increased both in houses and population, the commissioners for erecting fifty new churches within the "bills of mortality" purchased a site for a church and cemetery, consisting of a field, which was walled in and called the "Artillery Ground," from the fact that the train-bands of Southwark used to practise therein. The church was accordingly built, and dedicated to St. John, and, agreeably to an Act of the 6th Geo. II., 1733, "the district of Horsey-down, Horsa-down, or Horsley-down (so called from its having been used by the inhabitants as a grazing-field for their horses and cattle), was appointed for the new parish." Elmes observes, very absurdly: "Popular legends derive its name from a belief that the horse of King John lay down with that monarch upon his back, and hence horse-lye-down; but as the entire tract so called was, according to Stow, a grazing-ground, called Horse-down, it is more probably a corruption of that title." In speaking of the derivation of the name of Horselydown, the author of "A New View of London" (1708), remarks: "This street, as I was told by a sober counsellor at law, who said he had it from an old record, was so called for that the water, formerly overflowing it, was so effectually drawn off that the place became a green field, where horses and other cattle used to pasture and lye down before the street was built." Near it, as we further learn from the same work, was Horselydown Fair Street, described as a considerable street, between Paris Street, Tooley Street, and Five Foot Lane, Southwark.