HOT PUNCH [1]. AKA and see "Blue Bonnets Hornpipe," "Frolic (The)," "Orange and Blue (2)," "Lick the Laddle Sandy (2)," "Queen's Marriage (The)." Scottish, Jig. D Major. Standard tuning (fiddle). AB. Usually known as "Orange and Blue," by which title it is widely printed. The word 'punch' derives from a Hindi word, panch, meaning 'five', because of its five ingredients: spirits, water, lemon-juice, sugar and spices. The word was first recorded in English in 1669. 4/4 time versions of the melody go under the title "Frolic (The)" (e.g. William Vickers), among others (see alternates, above). The tune was popularlized in the mid-20th century by melodeon player Bob Cann (Dartmoor). 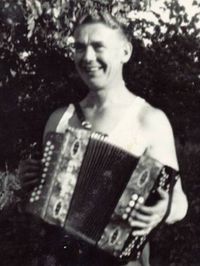